Matador Resources (NYSE:MTDR – Get Rating) last released its quarterly earnings data on Tuesday, July 26th. The energy company reported $3.47 earnings per share (EPS) for the quarter, beating analysts’ consensus estimates of $3.16 by $0.31. Matador Resources had a net margin of 40.86% and a return on equity of 43.58%. The firm had revenue of $943.93 million for the quarter, compared to analysts’ expectations of $829.21 million. During the same quarter in the previous year, the company earned $1.02 earnings per share.

Want More Great Investing Ideas?
Separately, MKM Partners reiterated a “buy” rating and set a $68.00 price target on shares of Matador Resources in a research report on Wednesday. Two research analysts have rated the stock with a hold rating and eight have assigned a buy rating to the stock. According to data from MarketBeat, the stock currently has a consensus rating of “Moderate Buy” and a consensus target price of $63.78.

The firm also recently disclosed a quarterly dividend, which was paid on Thursday, September 1st. Investors of record on Wednesday, August 17th were paid a dividend of $0.10 per share. The ex-dividend date of this dividend was Tuesday, August 16th. This represents a $0.40 annualized dividend and a yield of 0.74%. This is a positive change from Matador Resources’s previous quarterly dividend of $0.05. Matador Resources’s payout ratio is presently 4.59%.

Matador Resources Company, an independent energy company, engages in the exploration, development, production, and acquisition of oil and natural gas resources in the United States. It operates through two segments, Exploration and Production; and Midstream. The company primarily holds interests in the Wolfcamp and Bone Spring plays in the Delaware Basin in Southeast New Mexico and West Texas. 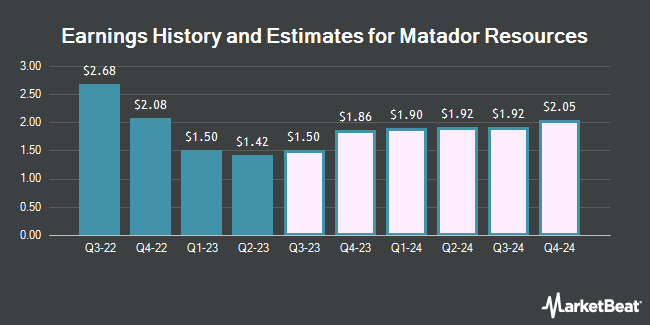 Complete the form below to receive the latest headlines and analysts' recommendations for Matador Resources with our free daily email newsletter: