State of Alaska Department of Revenue boosted its position in shares of Rush Enterprises, Inc. (NASDAQ:RUSHA – Get Rating) by 116.8% in the second quarter, Holdings Channel.com reports. The institutional investor owned 63,644 shares of the company’s stock after acquiring an additional 34,289 shares during the period. State of Alaska Department of Revenue’s holdings in Rush Enterprises were worth $3,067,000 at the end of the most recent reporting period.

Want More Great Investing Ideas?
Rush Enterprises (NASDAQ:RUSHA – Get Rating) last released its earnings results on Tuesday, July 26th. The company reported $1.75 earnings per share for the quarter, topping analysts’ consensus estimates of $1.44 by $0.31. Rush Enterprises had a return on equity of 21.23% and a net margin of 5.74%. The business had revenue of $1.79 billion for the quarter. On average, sell-side analysts anticipate that Rush Enterprises, Inc. will post 5.68 earnings per share for the current year.

The firm also recently announced a quarterly dividend, which was paid on Monday, September 12th. Shareholders of record on Friday, August 12th were paid a $0.21 dividend. This is a positive change from Rush Enterprises’s previous quarterly dividend of $0.19. The ex-dividend date was Thursday, August 11th. This represents a $0.84 dividend on an annualized basis and a yield of 1.88%. Rush Enterprises’s dividend payout ratio (DPR) is presently 14.24%.

Several analysts recently weighed in on the company. StockNews.com lowered Rush Enterprises from a “strong-buy” rating to a “buy” rating in a report on Thursday, August 11th. Credit Suisse Group increased their price target on Rush Enterprises from $59.00 to $61.00 and gave the company a “neutral” rating in a report on Thursday, July 28th.

Want to see what other hedge funds are holding RUSHA? Visit HoldingsChannel.com to get the latest 13F filings and insider trades for Rush Enterprises, Inc. (NASDAQ:RUSHA – Get Rating). 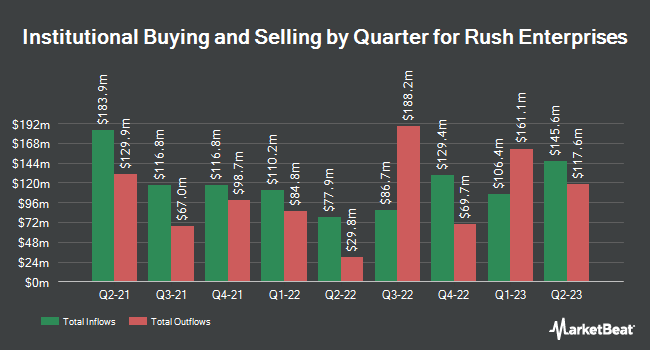 Complete the form below to receive the latest headlines and analysts' recommendations for Rush Enterprises with our free daily email newsletter: