Teachers Retirement System of The State of Kentucky Cuts Holdings in The AES Co. (NYSE:AES)

Teachers Retirement System of The State of Kentucky decreased its position in The AES Co. (NYSE:AES – Get Rating) by 4.2% in the first quarter, according to its most recent Form 13F filing with the SEC. The institutional investor owned 47,061 shares of the utilities provider’s stock after selling 2,048 shares during the period. Teachers Retirement System of The State of Kentucky’s holdings in AES were worth $1,211,000 at the end of the most recent quarter.

Want More Great Investing Ideas?
AES (NYSE:AES – Get Rating) last posted its quarterly earnings results on Friday, August 5th. The utilities provider reported $0.34 earnings per share for the quarter, topping analysts’ consensus estimates of $0.31 by $0.03. AES had a negative net margin of 2.64% and a positive return on equity of 32.93%. The firm had revenue of $3.08 billion for the quarter, compared to analyst estimates of $2.47 billion. During the same period in the previous year, the business posted $0.31 earnings per share. AES’s quarterly revenue was up 14.0% on a year-over-year basis. As a group, sell-side analysts expect that The AES Co. will post 1.61 EPS for the current fiscal year.

The company also recently announced a quarterly dividend, which was paid on Monday, August 15th. Shareholders of record on Monday, August 1st were paid a dividend of $0.158 per share. This represents a $0.63 dividend on an annualized basis and a yield of 2.52%. The ex-dividend date was Friday, July 29th. AES’s dividend payout ratio (DPR) is presently -108.62%.

AES has been the topic of several research analyst reports. Morgan Stanley lifted their target price on shares of AES from $29.50 to $32.00 and gave the company an “overweight” rating in a research report on Thursday, August 18th. StockNews.com lowered shares of AES from a “hold” rating to a “sell” rating in a research report on Monday. One analyst has rated the stock with a sell rating, one has assigned a hold rating and four have issued a buy rating to the stock. According to MarketBeat.com, the stock has an average rating of “Moderate Buy” and an average target price of $29.00.

The AES Corporation operates as a diversified power generation and utility company. It owns and/or operates power plants to generate and sell power to customers, such as utilities, industrial users, and other intermediaries. The company also owns and/or operates utilities to generate or purchase, distribute, transmit, and sell electricity to end-user customers in the residential, commercial, industrial, and governmental sectors; and generates and sells electricity on the wholesale market.

Want to see what other hedge funds are holding AES? Visit HoldingsChannel.com to get the latest 13F filings and insider trades for The AES Co. (NYSE:AES – Get Rating). 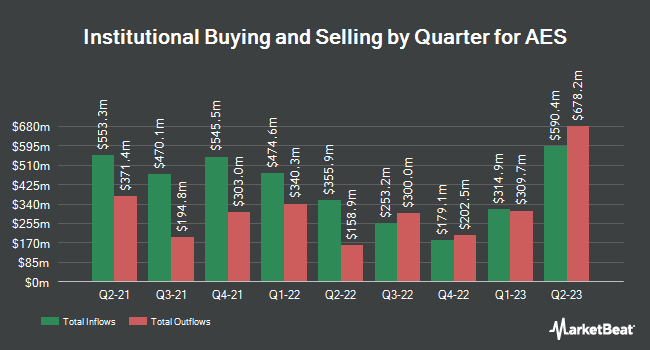 Receive News & Ratings for AES Daily - Enter your email address below to receive a concise daily summary of the latest news and analysts' ratings for AES and related companies with MarketBeat.com's FREE daily email newsletter.

Complete the form below to receive the latest headlines and analysts' recommendations for AES with our free daily email newsletter: