Capri (NYSE:CPRI – Get Rating) last announced its quarterly earnings results on Wednesday, November 9th. The company reported $1.79 EPS for the quarter, topping analysts’ consensus estimates of $1.54 by $0.25. Capri had a net margin of 14.10% and a return on equity of 37.00%. The firm had revenue of $1.41 billion during the quarter, compared to analyst estimates of $1.40 billion. During the same period in the previous year, the business posted $1.53 earnings per share. The business’s revenue for the quarter was up 8.6% on a year-over-year basis.

Insider Buying and Selling at Capri

In related news, Director Judy Gibbons sold 4,920 shares of the firm’s stock in a transaction dated Monday, August 29th. The stock was sold at an average price of $48.88, for a total transaction of $240,489.60. Following the completion of the sale, the director now directly owns 24,620 shares of the company’s stock, valued at approximately $1,203,425.60. The sale was disclosed in a filing with the Securities & Exchange Commission, which can be accessed through the SEC website. 2.60% of the stock is currently owned by insiders. 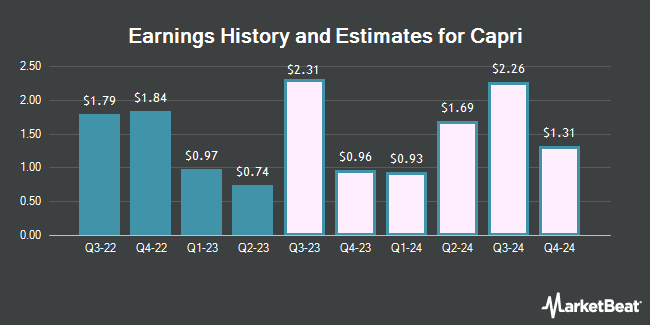