Steward Partners Investment Advisory LLC cut its holdings in Upstart Holdings, Inc. (NASDAQ:UPST – Get Rating) by 36.9% in the second quarter, according to the company in its most recent disclosure with the Securities and Exchange Commission (SEC). The firm owned 1,807 shares of the company’s stock after selling 1,057 shares during the quarter. Steward Partners Investment Advisory LLC’s holdings in Upstart were worth $57,000 as of its most recent SEC filing.

Several research firms have issued reports on UPST. Atlantic Securities lowered Upstart from a “neutral” rating to an “underweight” rating and cut their target price for the company from $32.00 to $22.00 in a research note on Thursday, August 11th. Barclays lifted their price objective on shares of Upstart from $25.00 to $37.00 and gave the stock an “equal weight” rating in a research report on Monday, August 15th. Mizuho began coverage on shares of Upstart in a research report on Tuesday, October 25th. They set an “underperform” rating and a $17.00 target price for the company. Stephens cut their price target on shares of Upstart from $28.00 to $23.00 and set an “underweight” rating on the stock in a report on Tuesday, August 9th. Finally, Jefferies Financial Group decreased their price objective on Upstart from $25.00 to $20.00 in a report on Wednesday. Seven research analysts have rated the stock with a sell rating, four have given a hold rating and two have issued a buy rating to the stock. Based on data from MarketBeat, Upstart has a consensus rating of “Hold” and an average price target of $59.79.

Upstart Holdings, Inc, together with its subsidiaries, operates a cloud-based artificial intelligence (AI) lending platform in the United States. Its platform aggregates consumer demand for loans and connects it to its network of the company's AI-enabled bank partners. The company was founded in 2012 and is headquartered in San Mateo, California.

Want to see what other hedge funds are holding UPST? Visit HoldingsChannel.com to get the latest 13F filings and insider trades for Upstart Holdings, Inc. (NASDAQ:UPST – Get Rating). 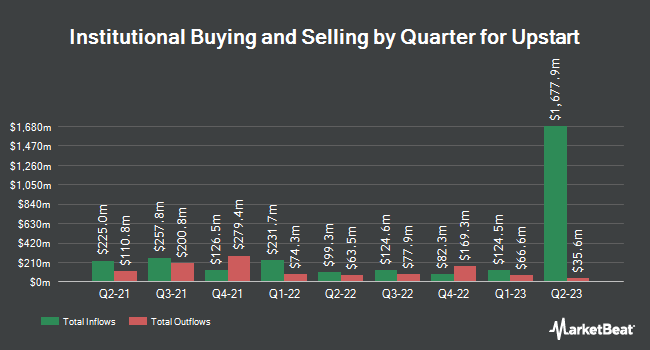