Casey’s General Stores (NASDAQ:CASY – Get Rating) had its target price hoisted by analysts at Royal Bank of Canada from $250.00 to $256.00 in a report released on Tuesday, Benzinga reports. The firm currently has a “sector perform” rating on the stock. Royal Bank of Canada’s price target would suggest a potential upside of 6.41% from the stock’s current price.

In other Casey’s General Stores news, Director Mike Spanos purchased 454 shares of the business’s stock in a transaction on Monday, September 12th. The shares were purchased at an average cost of $220.45 per share, with a total value of $100,084.30. Following the transaction, the director now directly owns 454 shares of the company’s stock, valued at approximately $100,084.30. The purchase was disclosed in a document filed with the SEC, which is accessible through the SEC website. Insiders own 0.28% of the company’s stock. 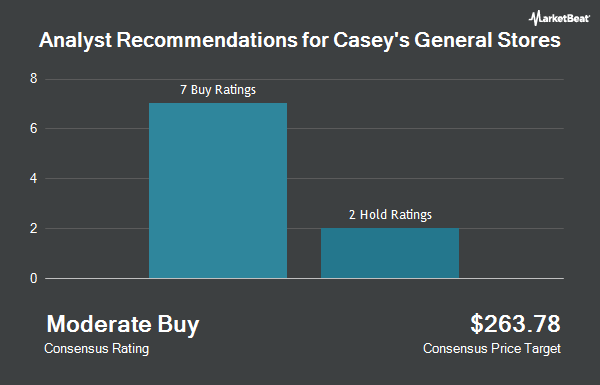