Shares of Cullen/Frost Bankers, Inc. (NYSE:CFR – Get Rating) have received a consensus recommendation of “Hold” from the thirteen research firms that are covering the stock, Marketbeat reports. One research analyst has rated the stock with a sell rating, six have issued a hold rating and four have issued a buy rating on the company. The average 12 month price objective among brokerages that have issued a report on the stock in the last year is $148.45.

In other Cullen/Frost Bankers news, EVP Bobby Berman sold 1,941 shares of the firm’s stock in a transaction on Friday, October 28th. The stock was sold at an average price of $151.62, for a total value of $294,294.42. Following the completion of the sale, the executive vice president now owns 24,589 shares of the company’s stock, valued at $3,728,184.18. The transaction was disclosed in a filing with the SEC, which is available through this hyperlink. 3.76% of the stock is currently owned by corporate insiders.

The firm also recently declared a quarterly dividend, which will be paid on Thursday, December 15th. Investors of record on Wednesday, November 30th will be paid a $0.87 dividend. The ex-dividend date is Tuesday, November 29th. This represents a $3.48 dividend on an annualized basis and a dividend yield of 2.40%. Cullen/Frost Bankers’s dividend payout ratio (DPR) is presently 46.71%. 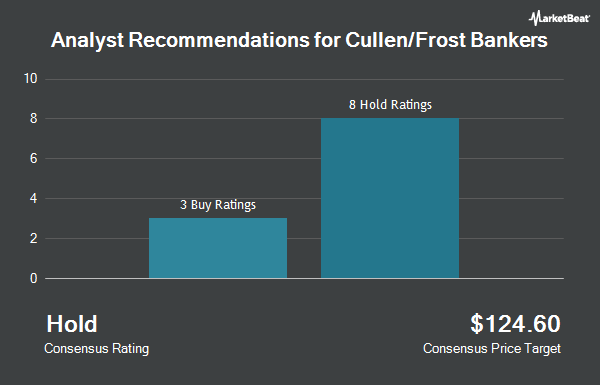