Krispy Kreme (NASDAQ:DNUT) Given a $15.00 Price Target by Citigroup Analysts

Citigroup set a $15.00 price target on Krispy Kreme (NASDAQ:DNUT – Get Rating) in a report released on Wednesday, The Fly reports.

Want More Great Investing Ideas?
Krispy Kreme (NASDAQ:DNUT – Get Rating) last announced its quarterly earnings data on Wednesday, August 17th. The company reported $0.05 earnings per share (EPS) for the quarter, missing analysts’ consensus estimates of $0.06 by ($0.01). The business had revenue of $375.25 million during the quarter, compared to analyst estimates of $385.94 million. Krispy Kreme had a negative net margin of 0.77% and a positive return on equity of 2.17%. The firm’s revenue for the quarter was up 7.5% compared to the same quarter last year. During the same period in the prior year, the firm earned $0.08 earnings per share. Equities research analysts predict that Krispy Kreme will post 0.2 earnings per share for the current year.

The company also recently disclosed a quarterly dividend, which was paid on Wednesday, November 9th. Shareholders of record on Wednesday, October 26th were issued a dividend of $0.035 per share. This represents a $0.14 annualized dividend and a yield of 0.92%. The ex-dividend date was Tuesday, October 25th. Krispy Kreme’s dividend payout ratio (DPR) is -199.97%.

Krispy Kreme, Inc, together with its subsidiaries, operates through an omni-channel business model to provide doughnut experiences and produce doughnuts. The company operates through three segments: U.S. and Canada, International, and Market Development. It also produces cookies, brownies, cookie cakes, ice cream, cookie-wiches, and cold milk, as well as doughnut mixes, other ingredients, and doughnut-making equipment. 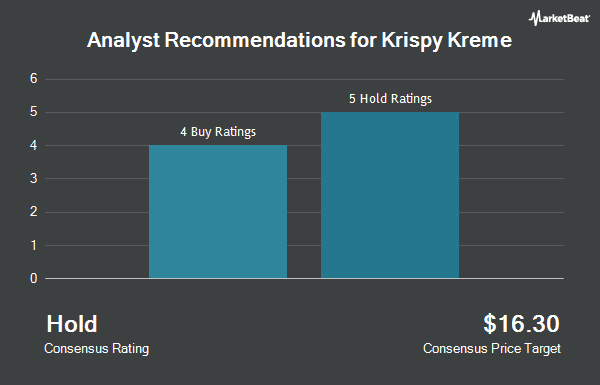 Complete the form below to receive the latest headlines and analysts' recommendations for Krispy Kreme with our free daily email newsletter: