Oppenheimer & Co. Inc. lifted its holdings in shares of IonQ, Inc. (NYSE:IONQ – Get Rating) by 58.8% in the second quarter, HoldingsChannel.com reports. The institutional investor owned 27,785 shares of the company’s stock after purchasing an additional 10,285 shares during the period. Oppenheimer & Co. Inc.’s holdings in IonQ were worth $122,000 as of its most recent filing with the Securities and Exchange Commission.

A number of other institutional investors have also recently modified their holdings of the business. Sandy Spring Bank acquired a new stake in IonQ in the second quarter valued at $913,000. Vanguard Group Inc. lifted its stake in shares of IonQ by 4.4% in the first quarter. Vanguard Group Inc. now owns 3,766,033 shares of the company’s stock valued at $48,054,000 after purchasing an additional 160,077 shares during the period. Transcend Capital Advisors LLC purchased a new stake in IonQ during the second quarter worth about $664,000. Carnegie Capital Asset Management LLC grew its position in IonQ by 32.0% during the second quarter. Carnegie Capital Asset Management LLC now owns 541,300 shares of the company’s stock worth $2,371,000 after buying an additional 131,100 shares during the period. Finally, Ergoteles LLC purchased a new position in IonQ in the first quarter valued at about $1,478,000. 62.32% of the stock is currently owned by hedge funds and other institutional investors.

Want More Great Investing Ideas?
Several equities research analysts have recently commented on the company. The Goldman Sachs Group boosted their price target on IonQ from $8.00 to $9.00 and gave the stock a “neutral” rating in a research note on Tuesday, August 16th. Benchmark lowered their target price on IonQ from $12.00 to $8.00 and set a “buy” rating on the stock in a report on Wednesday.

IonQ, Inc engages in the development of general-purpose quantum computing systems. It sells access to quantum computers with 20 qubits. The company makes access to its quantum computers through cloud platforms, such as Amazon Web Services' (AWS) Amazon Braket, Microsoft's Azure Quantum, and Google's Cloud Marketplace, as well as through its cloud service.

Want to see what other hedge funds are holding IONQ? Visit HoldingsChannel.com to get the latest 13F filings and insider trades for IonQ, Inc. (NYSE:IONQ – Get Rating). 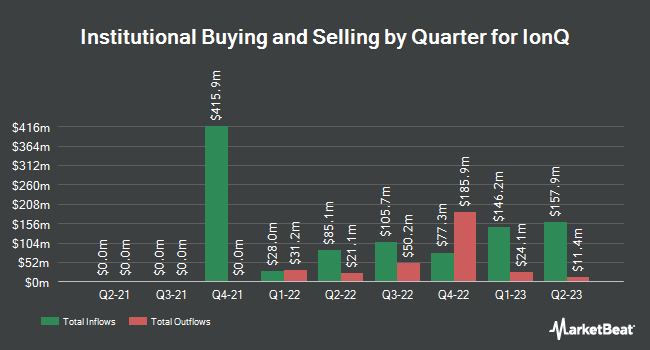 Receive News & Ratings for IonQ Daily - Enter your email address below to receive a concise daily summary of the latest news and analysts' ratings for IonQ and related companies with MarketBeat.com's FREE daily email newsletter.

Complete the form below to receive the latest headlines and analysts' recommendations for IonQ with our free daily email newsletter: