Pictet Asset Management SA lifted its holdings in shares of Exelixis, Inc. (NASDAQ:EXEL – Get Rating) by 16.5% in the second quarter, according to its most recent disclosure with the Securities and Exchange Commission. The fund owned 226,584 shares of the biotechnology company’s stock after acquiring an additional 32,065 shares during the quarter. Pictet Asset Management SA’s holdings in Exelixis were worth $4,717,000 at the end of the most recent quarter.

Want More Great Investing Ideas?
In related news, EVP Patrick J. Haley sold 40,000 shares of Exelixis stock in a transaction on Monday, September 12th. The stock was sold at an average price of $17.94, for a total transaction of $717,600.00. Following the completion of the sale, the executive vice president now owns 261,591 shares of the company’s stock, valued at $4,692,942.54. The transaction was disclosed in a filing with the Securities & Exchange Commission, which is available through this link. 2.90% of the stock is owned by corporate insiders.

Exelixis, Inc, an oncology-focused biotechnology company, focuses on the discovery, development, and commercialization of new medicines to treat cancers in the United States. The company offers CABOMETYX tablets for the treatment of patients with advanced renal cell carcinoma who received prior anti-angiogenic therapy; and COMETRIQ capsules for the treatment of progressive and metastatic medullary thyroid cancer.

Want to see what other hedge funds are holding EXEL? Visit HoldingsChannel.com to get the latest 13F filings and insider trades for Exelixis, Inc. (NASDAQ:EXEL – Get Rating). 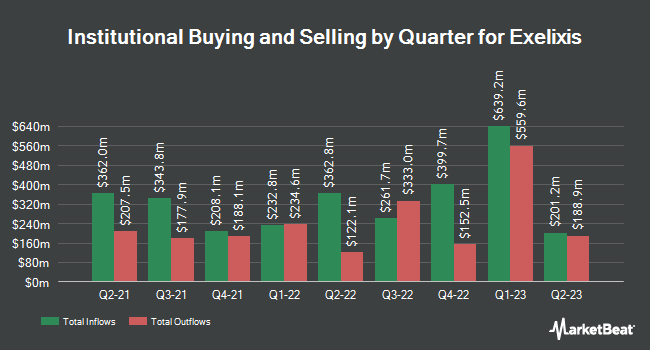 Receive News & Ratings for Exelixis Daily - Enter your email address below to receive a concise daily summary of the latest news and analysts' ratings for Exelixis and related companies with MarketBeat.com's FREE daily email newsletter.

Complete the form below to receive the latest headlines and analysts' recommendations for Exelixis with our free daily email newsletter: