Shell Asset Management Co. lowered its position in IAMGOLD Co. (NYSE:IAG – Get Rating) (TSE:IMG) by 13.8% in the second quarter, Holdings Channel.com reports. The fund owned 47,582 shares of the mining company’s stock after selling 7,600 shares during the period. Shell Asset Management Co.’s holdings in IAMGOLD were worth $76,000 as of its most recent filing with the Securities and Exchange Commission.

IAG has been the subject of several analyst reports. StockNews.com upgraded IAMGOLD from a “sell” rating to a “hold” rating in a research report on Friday, November 11th. Bank of America upgraded IAMGOLD from an “underperform” rating to a “buy” rating and cut their target price for the stock from $2.10 to $1.65 in a research report on Wednesday, October 19th. BMO Capital Markets cut their target price on IAMGOLD from $1.50 to $1.25 and set a “market perform” rating for the company in a research report on Wednesday, October 19th. Finally, National Bank Financial raised their price target on IAMGOLD from C$2.25 to C$2.50 in a report on Thursday, November 10th. Six equities research analysts have rated the stock with a sell rating, three have given a hold rating and one has issued a buy rating to the company’s stock. According to MarketBeat, IAMGOLD presently has an average rating of “Hold” and an average price target of $2.55.

Want to see what other hedge funds are holding IAG? Visit HoldingsChannel.com to get the latest 13F filings and insider trades for IAMGOLD Co. (NYSE:IAG – Get Rating) (TSE:IMG). 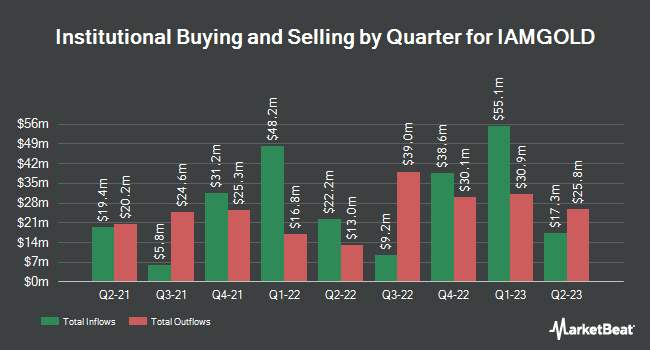