Shares of BankUnited, Inc. (NYSE:BKU – Get Rating) have received an average recommendation of “Hold” from the nine analysts that are currently covering the stock, MarketBeat.com reports. Two research analysts have rated the stock with a sell recommendation and three have assigned a hold recommendation to the company. The average twelve-month price target among brokers that have issued ratings on the stock in the last year is $44.38.

Insider Buying and Selling at BankUnited

In other news, Director A. Gail Prudenti sold 4,500 shares of the business’s stock in a transaction on Thursday, November 10th. The stock was sold at an average price of $37.26, for a total value of $167,670.00. Following the completion of the transaction, the director now directly owns 9,729 shares of the company’s stock, valued at $362,502.54. The transaction was disclosed in a legal filing with the SEC, which is accessible through this hyperlink. 0.91% of the stock is owned by insiders.

Institutional Investors Weigh In On BankUnited

BankUnited (NYSE:BKU – Get Rating) last announced its quarterly earnings data on Thursday, October 20th. The financial services provider reported $1.12 EPS for the quarter, beating the consensus estimate of $1.01 by $0.11. BankUnited had a net margin of 29.75% and a return on equity of 12.71%. During the same period in the previous year, the business earned $0.94 earnings per share. As a group, analysts predict that BankUnited will post 3.75 earnings per share for the current fiscal year.

The business also recently announced a quarterly dividend, which was paid on Monday, October 31st. Investors of record on Friday, October 14th were paid a $0.25 dividend. This represents a $1.00 dividend on an annualized basis and a yield of 2.77%. The ex-dividend date was Thursday, October 13th. BankUnited’s payout ratio is currently 24.15%.

BankUnited, Inc operates as the bank holding company for BankUnited, a national banking association that provides a range of banking services in the United States. The company offers deposit products, such as checking, money market deposit, and savings accounts; certificates of deposit; and treasury, commercial payment, and cash management services. 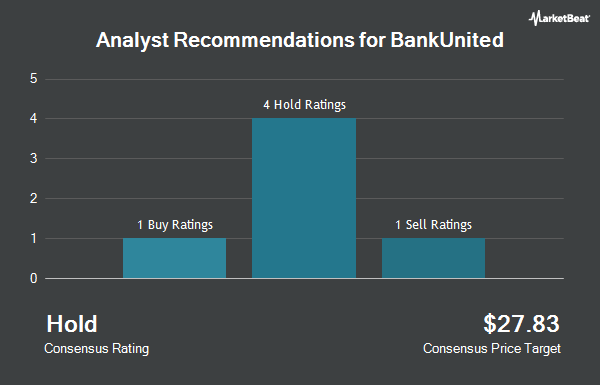 Complete the form below to receive the latest headlines and analysts' recommendations for BankUnited with our free daily email newsletter: