Shares of Inari Medical, Inc. (NASDAQ:NARI – Get Rating) have been assigned an average rating of “Moderate Buy” from the eleven brokerages that are presently covering the company, Marketbeat Ratings reports. One equities research analyst has rated the stock with a hold rating and nine have assigned a buy rating to the company. The average 12-month target price among brokerages that have updated their coverage on the stock in the last year is $93.30.

Inari Medical, Inc, a medical device company, develops, manufactures, markets, and sells devices for the interventional treatment of venous diseases in the United States. The company provides ClotTriever, a mechanical thrombectomy system, which is designed to core, capture, and remove large clots from large vessels, as well as for treatment of deep vein thrombosis; and FlowTriever, a large bore catheter-based aspiration and mechanical thrombectomy system, for treatment of pulmonary embolism. 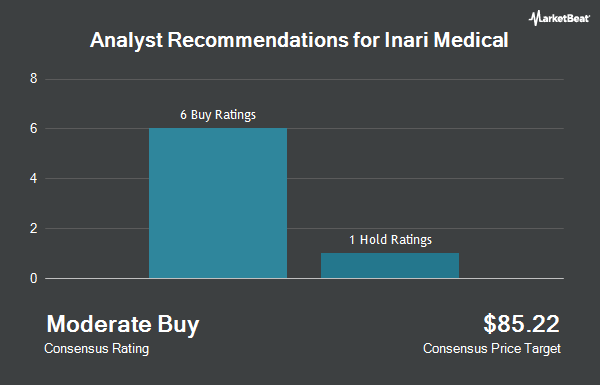 Complete the form below to receive the latest headlines and analysts' recommendations for Inari Medical with our free daily email newsletter: