Macy’s (NYSE:M – Get Rating) had its price target decreased by Deutsche Bank Aktiengesellschaft from $25.00 to $24.00 in a report released on Friday morning, The Fly reports.

Want More Great Investing Ideas?
Macy’s (NYSE:M – Get Rating) last posted its quarterly earnings data on Thursday, November 17th. The company reported $0.52 earnings per share for the quarter, topping the consensus estimate of $0.19 by $0.33. The company had revenue of $5.23 billion during the quarter, compared to analyst estimates of $5.20 billion. Macy’s had a net margin of 5.68% and a return on equity of 42.58%. The company’s revenue was down 3.9% on a year-over-year basis. During the same quarter last year, the business posted $1.23 earnings per share. On average, equities analysts forecast that Macy’s will post 4.17 earnings per share for the current fiscal year.

The firm also recently declared a quarterly dividend, which will be paid on Tuesday, January 3rd. Shareholders of record on Thursday, December 15th will be paid a $0.1575 dividend. The ex-dividend date is Wednesday, December 14th. This represents a $0.63 annualized dividend and a yield of 2.83%. Macy’s’s payout ratio is currently 13.13%.

In other news, SVP Paul Griscom sold 2,868 shares of the business’s stock in a transaction dated Wednesday, August 31st. The shares were sold at an average price of $17.43, for a total transaction of $49,989.24. Following the transaction, the senior vice president now directly owns 4,688 shares in the company, valued at approximately $81,711.84. The transaction was disclosed in a document filed with the Securities & Exchange Commission, which can be accessed through the SEC website. 0.58% of the stock is owned by company insiders.

Macy's, Inc, an omni-channel retail organization, operates stores, Websites, and mobile applications. The company sells a range of merchandise, such as apparel and accessories for men, women, and children; cosmetics; home furnishings; and other consumer goods. As of January 29, 2022, it operated 725 department stores in the District of Columbia, Puerto Rico, and Guam under the Macy's, Macy's Backstage, Market by Macy's, Bloomingdale's, Bloomingdale's The Outlet, Bloomies, and bluemercury brands. 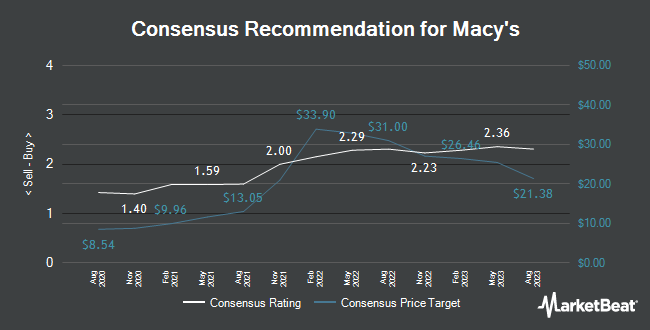 Receive News & Ratings for Macy's Daily - Enter your email address below to receive a concise daily summary of the latest news and analysts' ratings for Macy's and related companies with MarketBeat.com's FREE daily email newsletter.

Complete the form below to receive the latest headlines and analysts' recommendations for Macy's with our free daily email newsletter: