Devon Energy (NYSE:DVN – Get Rating) had its target price lifted by Argus from $77.00 to $90.00 in a report released on Thursday morning, The Fly reports. They currently have a buy rating on the energy company’s stock.

In related news, EVP Dennis C. Cameron sold 5,557 shares of the business’s stock in a transaction on Wednesday, November 9th. The shares were sold at an average price of $70.48, for a total value of $391,657.36. Following the completion of the transaction, the executive vice president now directly owns 258,981 shares in the company, valued at approximately $18,252,980.88. The transaction was disclosed in a document filed with the SEC, which is accessible through the SEC website. Company insiders own 0.80% of the company’s stock. 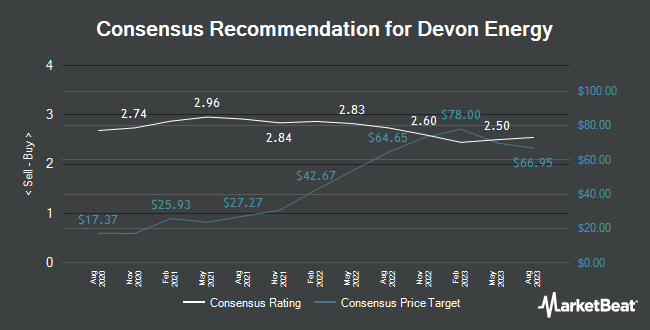 Complete the form below to receive the latest headlines and analysts' recommendations for Devon Energy with our free daily email newsletter: