Envestnet Asset Management Inc. raised its holdings in shares of BRP Group, Inc. (NASDAQ:BRP – Get Rating) by 219.4% in the 2nd quarter, according to the company in its most recent disclosure with the Securities & Exchange Commission. The firm owned 60,944 shares of the company’s stock after buying an additional 41,861 shares during the period. Envestnet Asset Management Inc.’s holdings in BRP Group were worth $1,472,000 at the end of the most recent reporting period.

Want More Great Investing Ideas?
BRP Group (NASDAQ:BRP – Get Rating) last announced its earnings results on Monday, November 7th. The company reported $0.11 earnings per share for the quarter, meeting analysts’ consensus estimates of $0.11. BRP Group had a negative net margin of 1.78% and a positive return on equity of 6.70%. The business had revenue of $259.37 million during the quarter, compared to the consensus estimate of $229.79 million. On average, analysts forecast that BRP Group, Inc. will post 0.76 EPS for the current year.

In other BRP Group news, Chairman Lowry Baldwin bought 172,000 shares of the firm’s stock in a transaction on Tuesday, September 20th. The stock was acquired at an average price of $28.87 per share, with a total value of $4,965,640.00. Following the completion of the purchase, the chairman now owns 172,000 shares of the company’s stock, valued at $4,965,640. The acquisition was disclosed in a document filed with the SEC, which is available at the SEC website. Insiders own 23.36% of the company’s stock.

Want to see what other hedge funds are holding BRP? Visit HoldingsChannel.com to get the latest 13F filings and insider trades for BRP Group, Inc. (NASDAQ:BRP – Get Rating). 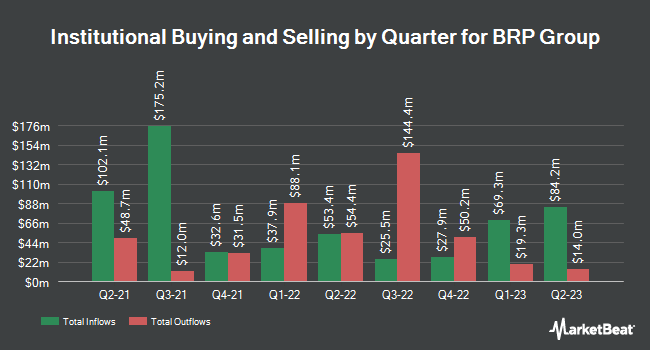 Complete the form below to receive the latest headlines and analysts' recommendations for BRP Group with our free daily email newsletter: