Occidental Petroleum (NYSE:OXY – Get Rating) had its target price increased by Citigroup from $67.00 to $75.00 in a research note published on Thursday, The Fly reports. The brokerage currently has a neutral rating on the oil and gas producer’s stock.

Want More Great Investing Ideas?
The firm also recently declared a quarterly dividend, which will be paid on Thursday, January 12th. Investors of record on Monday, December 12th will be issued a $0.13 dividend. The ex-dividend date of this dividend is Friday, December 9th. This represents a $0.52 annualized dividend and a yield of 0.73%. Occidental Petroleum’s payout ratio is 4.33%.

In other Occidental Petroleum news, major shareholder Berkshire Hathaway Inc purchased 1,737,316 shares of the business’s stock in a transaction that occurred on Wednesday, September 28th. The shares were purchased at an average price of $60.71 per share, for a total transaction of $105,472,454.36. Following the completion of the acquisition, the insider now owns 194,351,650 shares of the company’s stock, valued at approximately $11,799,088,671.50. The purchase was disclosed in a document filed with the Securities & Exchange Commission, which can be accessed through this hyperlink. 0.31% of the stock is currently owned by insiders.

Occidental Petroleum Corporation, together with its subsidiaries, engages in the acquisition, exploration, and development of oil and gas properties in the United States, the Middle East, Africa, and Latin America. It operates through three segments: Oil and Gas, Chemical, and Midstream and Marketing. 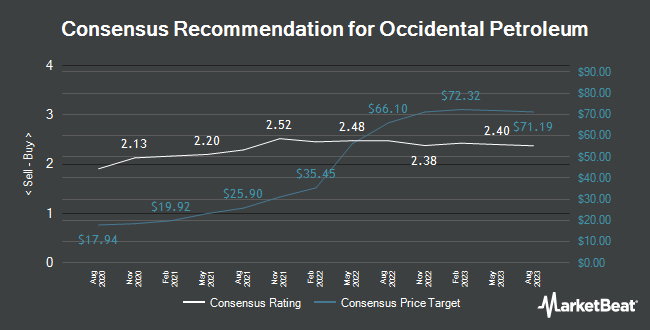 Complete the form below to receive the latest headlines and analysts' recommendations for Occidental Petroleum with our free daily email newsletter: