A number of other brokerages have also recently issued reports on CAL. Piper Sandler began coverage on shares of Caleres in a research report on Tuesday, October 25th. They issued a “neutral” rating and a $28.00 target price for the company. StockNews.com began coverage on Caleres in a research note on Wednesday, October 12th. They set a “buy” rating for the company. TheStreet downgraded Caleres from a “b-” rating to a “c” rating in a research note on Friday, August 26th. Finally, CL King reduced their price target on Caleres from $37.00 to $35.00 in a report on Thursday.

Caleres (NYSE:CAL – Get Rating) last released its quarterly earnings data on Tuesday, August 23rd. The textile maker reported $1.38 EPS for the quarter, beating the consensus estimate of $1.32 by $0.06. Caleres had a return on equity of 57.75% and a net margin of 6.65%. The company had revenue of $738.33 million during the quarter, compared to the consensus estimate of $736.05 million. During the same quarter in the prior year, the firm posted $1.19 EPS.

Institutional Investors Weigh In On Caleres

Caleres, Inc engages in the retail and wholesale of footwear in the United States, Canada, China, and Guam. It operates through Famous Footwear and Brand Portfolio segments. The company offers licensed, branded, and private-label athletic, casual, and dress footwear products to women, men, and children. 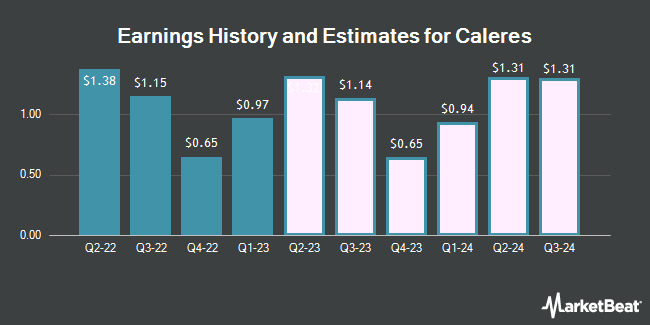 Receive News & Ratings for Caleres Daily - Enter your email address below to receive a concise daily summary of the latest news and analysts' ratings for Caleres and related companies with MarketBeat.com's FREE daily email newsletter.

Complete the form below to receive the latest headlines and analysts' recommendations for Caleres with our free daily email newsletter: