Kohl’s (NYSE:KSS – Get Rating) last announced its quarterly earnings data on Thursday, November 17th. The company reported $0.82 earnings per share (EPS) for the quarter, topping the consensus estimate of $0.59 by $0.23. The firm had revenue of $4.28 billion during the quarter, compared to the consensus estimate of $4.06 billion. Kohl’s had a return on equity of 12.46% and a net margin of 2.98%. The business’s revenue for the quarter was down 7.0% on a year-over-year basis. During the same period in the prior year, the business earned $1.65 EPS.

Insider Buying and Selling at Kohl’s

In other Kohl’s news, Director Jonas Prising bought 10,000 shares of the stock in a transaction on Tuesday, August 23rd. The shares were purchased at an average price of $29.67 per share, with a total value of $296,700.00. Following the acquisition, the director now directly owns 60,647 shares of the company’s stock, valued at approximately $1,799,396.49. The transaction was disclosed in a legal filing with the SEC, which is accessible through this hyperlink. Insiders own 0.60% of the company’s stock.

Kohl's Corporation operates as a retail company in the United States. It offers branded apparel, footwear, accessories, beauty, and home products through its stores and website. The company provides its products primarily under the brand names of Apt. 9, Croft & Barrow, Jumping Beans, SO, and Sonoma Goods for Life, as well as Food Network, LC Lauren Conrad, Nine West, and Simply Vera Vera Wang. 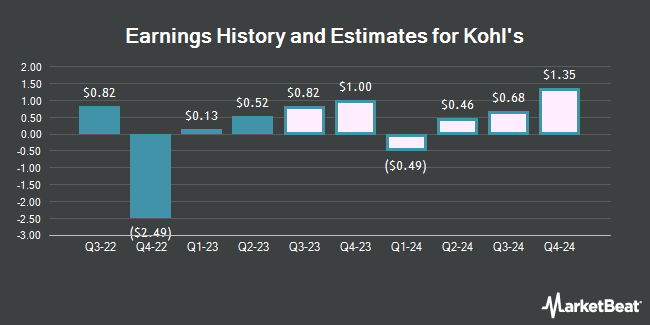 Receive News & Ratings for Kohl's Daily - Enter your email address below to receive a concise daily summary of the latest news and analysts' ratings for Kohl's and related companies with MarketBeat.com's FREE daily email newsletter.

Complete the form below to receive the latest headlines and analysts' recommendations for Kohl's with our free daily email newsletter: