WINTON GROUP Ltd cut its position in shares of Reata Pharmaceuticals, Inc. (NASDAQ:RETA – Get Rating) by 39.9% during the 2nd quarter, HoldingsChannel.com reports. The firm owned 9,818 shares of the company’s stock after selling 6,510 shares during the period. WINTON GROUP Ltd’s holdings in Reata Pharmaceuticals were worth $298,000 as of its most recent filing with the Securities and Exchange Commission (SEC).

Reata Pharmaceuticals (NASDAQ:RETA – Get Rating) last announced its earnings results on Tuesday, November 8th. The company reported ($2.16) earnings per share for the quarter, beating the consensus estimate of ($2.35) by $0.19. Reata Pharmaceuticals had a negative return on equity of 322.32% and a negative net margin of 9,897.91%. The business had revenue of $0.54 million during the quarter, compared to analysts’ expectations of $1.43 million. On average, sell-side analysts anticipate that Reata Pharmaceuticals, Inc. will post -8.38 earnings per share for the current year.

Reata Pharmaceuticals, Inc, a clinical-stage biopharmaceutical company, identifies, develops, and commercializes novel therapeutics for patients with serious or life-threatening diseases. The company is developing Phase 3 clinical trial programs, including bardoxolone methyl (bardoxolone) for the treatment of patients with chronic kidney disease (CKD) caused by Alport syndrome, as well as for a form of pulmonary arterial hypertension associated with connective tissue disease; omaveloxolone that is Phase II clinical trial to treat Friedreich's ataxia; and conduct Phase 2 study for various form of CKD, such as IgA nephropathy, type 1 and type 2 diabetic CKD, hypertensive CKD, focal segmental glomerulosclerosis, and others.

Want to see what other hedge funds are holding RETA? Visit HoldingsChannel.com to get the latest 13F filings and insider trades for Reata Pharmaceuticals, Inc. (NASDAQ:RETA – Get Rating). 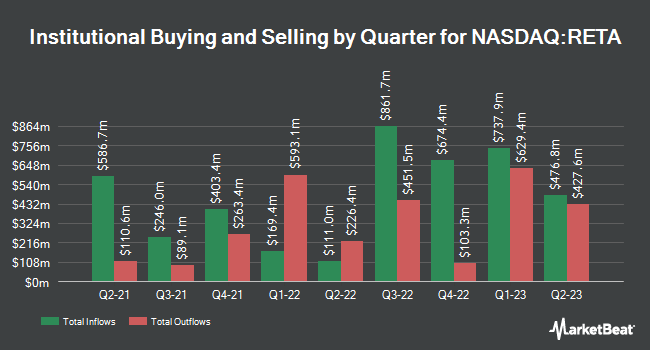 Complete the form below to receive the latest headlines and analysts' recommendations for Reata Pharmaceuticals with our free daily email newsletter: