Principal Financial Group Inc. raised its position in shares of Insmed Incorporated (NASDAQ:INSM – Get Rating) by 30.2% during the second quarter, according to its most recent disclosure with the Securities and Exchange Commission. The fund owned 1,044,748 shares of the biopharmaceutical company’s stock after acquiring an additional 242,612 shares during the quarter. Principal Financial Group Inc.’s holdings in Insmed were worth $20,602,000 as of its most recent SEC filing.

Insider Buying and Selling at Insmed

In related news, Director Melvin Md Sharoky bought 20,000 shares of Insmed stock in a transaction dated Monday, October 31st. The stock was purchased at an average cost of $17.53 per share, with a total value of $350,600.00. Following the transaction, the director now directly owns 281,021 shares of the company’s stock, valued at $4,926,298.13. The acquisition was disclosed in a legal filing with the SEC, which can be accessed through the SEC website. Company insiders own 4.40% of the company’s stock.

Insmed Incorporated is a global biopharmaceutical company on a mission to transform the lives of patients with serious and rare diseases. Insmed’s first commercial product is ARIKAYCE® (amikacin liposome inhalation suspension), which is approved in the United States for the treatment of Mycobacterium avium complex (MAC) lung disease as part of a combination antibacterial drug regimen for adult patients with limited or no alternative treatment options.

Want to see what other hedge funds are holding INSM? Visit HoldingsChannel.com to get the latest 13F filings and insider trades for Insmed Incorporated (NASDAQ:INSM – Get Rating). 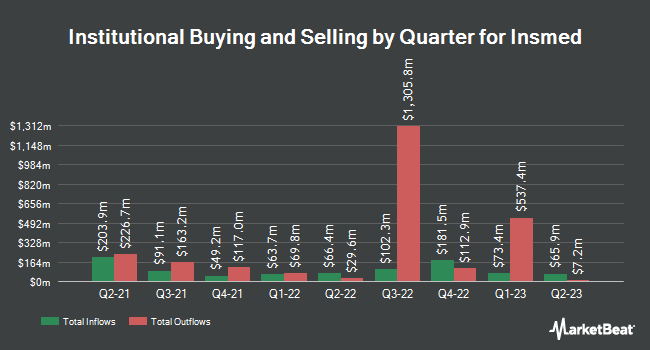 Receive News & Ratings for Insmed Daily - Enter your email address below to receive a concise daily summary of the latest news and analysts' ratings for Insmed and related companies with MarketBeat.com's FREE daily email newsletter.

Complete the form below to receive the latest headlines and analysts' recommendations for Insmed with our free daily email newsletter: