Texas Permanent School Fund trimmed its stake in shares of Apogee Enterprises, Inc. (NASDAQ:APOG – Get Rating) by 7.2% during the second quarter, according to the company in its most recent disclosure with the Securities & Exchange Commission. The firm owned 16,356 shares of the industrial products company’s stock after selling 1,272 shares during the period. Texas Permanent School Fund owned about 0.07% of Apogee Enterprises worth $641,000 as of its most recent SEC filing.

Separately, StockNews.com assumed coverage on shares of Apogee Enterprises in a research note on Wednesday, October 12th. They issued a “strong-buy” rating on the stock.

Want More Great Investing Ideas?
In other news, Director Herbert K. Parker sold 12,000 shares of the business’s stock in a transaction dated Tuesday, October 18th. The shares were sold at an average price of $43.61, for a total transaction of $523,320.00. Following the transaction, the director now directly owns 21,955 shares in the company, valued at approximately $957,457.55. The transaction was disclosed in a document filed with the Securities & Exchange Commission, which can be accessed through the SEC website. 1.82% of the stock is owned by company insiders.

Apogee Enterprises (NASDAQ:APOG – Get Rating) last issued its quarterly earnings results on Tuesday, September 20th. The industrial products company reported $1.06 earnings per share (EPS) for the quarter, beating the consensus estimate of $0.89 by $0.17. Apogee Enterprises had a net margin of 3.95% and a return on equity of 21.94%. The firm had revenue of $372.10 million for the quarter, compared to analyst estimates of $342.84 million. During the same period in the previous year, the business earned $0.53 EPS. The company’s revenue was up 14.2% compared to the same quarter last year. On average, equities analysts predict that Apogee Enterprises, Inc. will post 3.92 EPS for the current fiscal year.

The company also recently disclosed a quarterly dividend, which was paid on Wednesday, November 9th. Stockholders of record on Tuesday, October 25th were paid a dividend of $0.22 per share. The ex-dividend date was Monday, October 24th. This represents a $0.88 annualized dividend and a dividend yield of 1.84%. Apogee Enterprises’s dividend payout ratio is presently 35.92%.

Want to see what other hedge funds are holding APOG? Visit HoldingsChannel.com to get the latest 13F filings and insider trades for Apogee Enterprises, Inc. (NASDAQ:APOG – Get Rating). 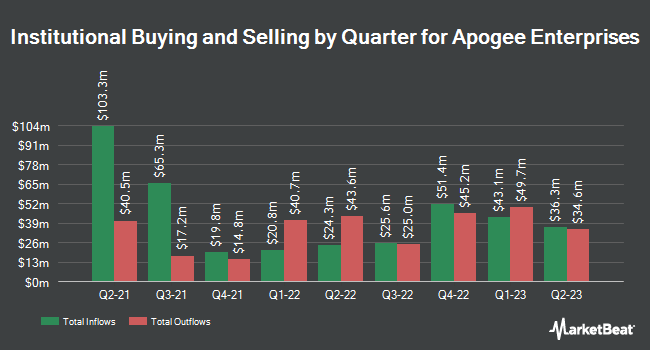 Complete the form below to receive the latest headlines and analysts' recommendations for Apogee Enterprises with our free daily email newsletter: