WINTON GROUP Ltd raised its stake in shares of Inovio Pharmaceuticals, Inc. (NASDAQ:INO – Get Rating) by 32.0% during the 2nd quarter, according to the company in its most recent 13F filing with the Securities and Exchange Commission. The institutional investor owned 54,307 shares of the biopharmaceutical company’s stock after acquiring an additional 13,151 shares during the period. WINTON GROUP Ltd’s holdings in Inovio Pharmaceuticals were worth $94,000 as of its most recent SEC filing.

Want More Great Investing Ideas?
Inovio Pharmaceuticals (NASDAQ:INO – Get Rating) last posted its earnings results on Tuesday, November 8th. The biopharmaceutical company reported ($0.15) earnings per share for the quarter, beating analysts’ consensus estimates of ($0.29) by $0.14. The business had revenue of $9.15 million during the quarter, compared to analyst estimates of $0.53 million. Inovio Pharmaceuticals had a negative return on equity of 100.75% and a negative net margin of 3,027.10%. The company’s quarterly revenue was up 3034.9% compared to the same quarter last year. During the same quarter in the previous year, the firm earned ($0.29) EPS. On average, equities analysts predict that Inovio Pharmaceuticals, Inc. will post -1.14 EPS for the current fiscal year.

Inovio Pharmaceuticals, Inc, a biotechnology company, focuses on the discovery, development, and commercialization of DNA medicines to treat and protect people from diseases associated with human papillomavirus (HPV), cancer, and infectious diseases. Its DNA medicines platform uses precisely designed SynCon that identify and optimize the DNA sequence of the target antigen, as well as CELLECTRA smart devices technology that facilitates delivery of the DNA plasmids.

Want to see what other hedge funds are holding INO? Visit HoldingsChannel.com to get the latest 13F filings and insider trades for Inovio Pharmaceuticals, Inc. (NASDAQ:INO – Get Rating). 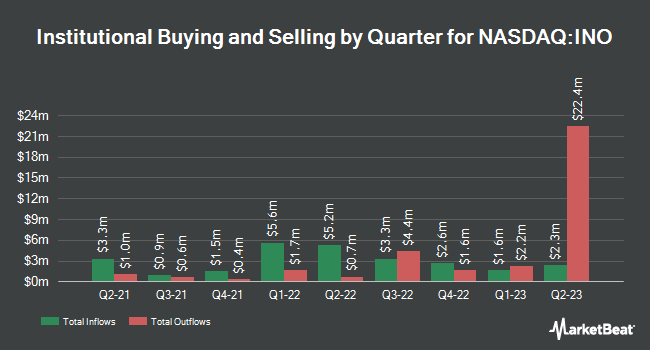 IT Tech Packaging Shares Up 3.2%

Complete the form below to receive the latest headlines and analysts' recommendations for Inovio Pharmaceuticals with our free daily email newsletter: