The Berkeley Group Holdings plc (LON:BKG – Get Rating) has been assigned an average rating of “Moderate Buy” from the eight brokerages that are presently covering the stock, Marketbeat.com reports. One investment analyst has rated the stock with a sell rating, two have assigned a hold rating and five have given a buy rating to the company. The average 1 year price objective among brokerages that have covered the stock in the last year is GBX 4,517.43 ($53.42).

Insider Transactions at The Berkeley Group

About The Berkeley Group

The Berkeley Group Holdings plc, together with its subsidiaries, engages in the residential-led and mixed-use property development activities in the United Kingdom. The company is also involved in land selling activities. It operates under the Berkeley, St Edward, St George, St James, St Joseph, and St William brand names. 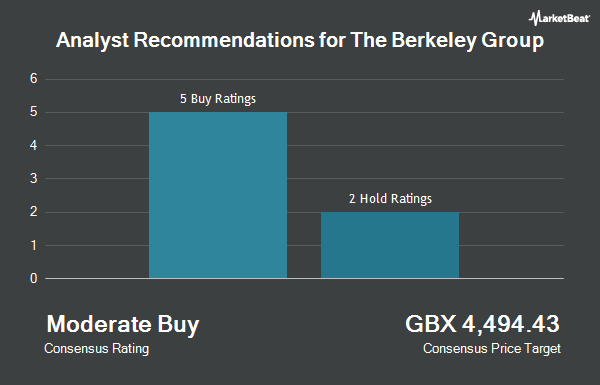 Complete the form below to receive the latest headlines and analysts' recommendations for The Berkeley Group with our free daily email newsletter: