JPMorgan Chase & Co. upgraded shares of Toll Brothers (NYSE:TOL – Get Rating) from a neutral rating to an overweight rating in a research report report published on Tuesday, The Fly reports. They currently have $58.00 price target on the construction company’s stock, up from their previous price target of $47.00.

Want More Great Investing Ideas?
Toll Brothers (NYSE:TOL – Get Rating) last posted its earnings results on Tuesday, August 23rd. The construction company reported $2.35 earnings per share (EPS) for the quarter, beating the consensus estimate of $2.30 by $0.05. The firm had revenue of $2.49 billion for the quarter, compared to analysts’ expectations of $2.49 billion. Toll Brothers had a return on equity of 18.93% and a net margin of 10.62%. During the same period in the previous year, the firm earned $1.87 earnings per share. Analysts forecast that Toll Brothers will post 9.31 EPS for the current year.

In other Toll Brothers news, Director Carl B. Marbach sold 1,000 shares of the firm’s stock in a transaction on Tuesday, October 11th. The stock was sold at an average price of $44.60, for a total transaction of $44,600.00. Following the transaction, the director now directly owns 71,155 shares in the company, valued at approximately $3,173,513. The transaction was disclosed in a document filed with the Securities & Exchange Commission, which is available at the SEC website. 8.28% of the stock is owned by corporate insiders.

Toll Brothers, Inc, together with its subsidiaries, designs, builds, markets, sells, and arranges finance for a range of detached and attached homes in luxury residential communities in the United States. The company operates in two segments, Traditional Home Building and City Living. It also designs, builds, markets, and sells condominiums through Toll Brothers City Living. 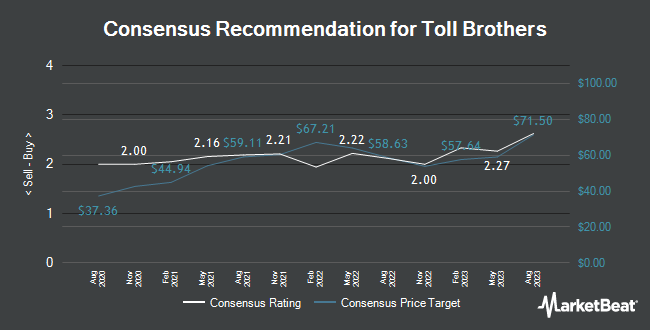 Complete the form below to receive the latest headlines and analysts' recommendations for Toll Brothers with our free daily email newsletter: