California Public Employees Retirement System trimmed its stake in shares of Coupa Software Incorporated (NASDAQ:COUP – Get Rating) by 3.9% during the second quarter, Holdings Channel reports. The firm owned 125,217 shares of the technology company’s stock after selling 5,019 shares during the period. California Public Employees Retirement System’s holdings in Coupa Software were worth $7,150,000 at the end of the most recent reporting period.

Coupa Software (NASDAQ:COUP – Get Rating) last released its quarterly earnings data on Tuesday, September 6th. The technology company reported ($0.52) EPS for the quarter, beating analysts’ consensus estimates of ($0.65) by $0.13. Coupa Software had a negative net margin of 43.73% and a negative return on equity of 24.29%. The business had revenue of $211.10 million during the quarter, compared to analysts’ expectations of $203.99 million. During the same quarter in the prior year, the company earned ($0.35) EPS. The firm’s quarterly revenue was up 17.8% on a year-over-year basis. As a group, equities research analysts predict that Coupa Software Incorporated will post -2.26 EPS for the current year.

Want to see what other hedge funds are holding COUP? Visit HoldingsChannel.com to get the latest 13F filings and insider trades for Coupa Software Incorporated (NASDAQ:COUP – Get Rating). 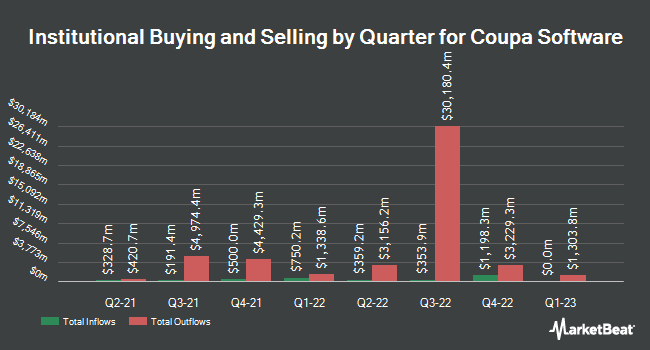 Brenntag Given a €65.00 Price Target by UBS Group Analysts

The Hackett Group Downgraded by StockNews.com to “Buy”

Complete the form below to receive the latest headlines and analysts' recommendations for Coupa Software with our free daily email newsletter: