JPMorgan Chase & Co. lessened its holdings in shares of Lithia Motors, Inc. (NYSE:LAD – Get Rating) by 3.1% during the 2nd quarter, according to its most recent disclosure with the SEC. The fund owned 289,556 shares of the company’s stock after selling 9,281 shares during the period. JPMorgan Chase & Co.’s holdings in Lithia Motors were worth $79,572,000 at the end of the most recent reporting period.

In other news, Director Shauna Mcintyre sold 180 shares of the firm’s stock in a transaction dated Thursday, September 15th. The stock was sold at an average price of $241.34, for a total transaction of $43,441.20. Following the sale, the director now owns 1,839 shares of the company’s stock, valued at $443,824.26. The transaction was disclosed in a legal filing with the SEC, which is available at the SEC website. 1.70% of the stock is currently owned by insiders.

Lithia Motors (NYSE:LAD – Get Rating) last released its quarterly earnings results on Wednesday, October 19th. The company reported $11.08 EPS for the quarter, missing analysts’ consensus estimates of $11.90 by ($0.82). The business had revenue of $7.30 billion for the quarter, compared to analyst estimates of $7.34 billion. Lithia Motors had a return on equity of 28.20% and a net margin of 4.70%. The company’s revenue for the quarter was up 18.2% compared to the same quarter last year. During the same period in the prior year, the business earned $11.21 EPS. Sell-side analysts anticipate that Lithia Motors, Inc. will post 45.7 earnings per share for the current fiscal year.

Lithia Motors, Inc operates as an automotive retailer in the United States. The company operates through three segments: Domestic, Import, and Luxury. It offers new and used vehicles; vehicle financing services; warranties, insurance contracts, and vehicle and theft protection services; and automotive repair and maintenance services, as well as sells vehicle body and parts under the Driveway and GreenCars brand names.

Want to see what other hedge funds are holding LAD? Visit HoldingsChannel.com to get the latest 13F filings and insider trades for Lithia Motors, Inc. (NYSE:LAD – Get Rating). 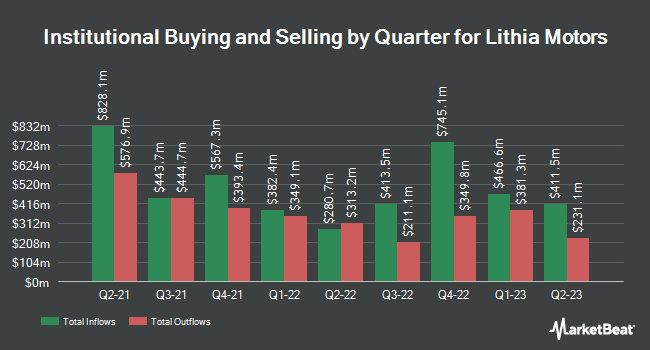 Complete the form below to receive the latest headlines and analysts' recommendations for Lithia Motors with our free daily email newsletter: