Lazard Asset Management LLC boosted its holdings in shares of Casey’s General Stores, Inc. (NASDAQ:CASY – Get Rating) by 42.7% during the second quarter, Holdings Channel.com reports. The institutional investor owned 498 shares of the company’s stock after acquiring an additional 149 shares during the quarter. Lazard Asset Management LLC’s holdings in Casey’s General Stores were worth $92,000 as of its most recent filing with the Securities & Exchange Commission.

In other news, Director Mike Spanos acquired 454 shares of the stock in a transaction on Monday, September 12th. The stock was acquired at an average cost of $220.45 per share, for a total transaction of $100,084.30. Following the completion of the transaction, the director now directly owns 454 shares in the company, valued at $100,084.30. The purchase was disclosed in a legal filing with the SEC, which is accessible through this link. Company insiders own 0.28% of the company’s stock.

The company also recently disclosed a quarterly dividend, which was paid on Tuesday, November 15th. Shareholders of record on Tuesday, November 1st were given a dividend of $0.38 per share. The ex-dividend date of this dividend was Monday, October 31st. This represents a $1.52 annualized dividend and a yield of 0.64%. Casey’s General Stores’s dividend payout ratio is currently 15.22%.

Want to see what other hedge funds are holding CASY? Visit HoldingsChannel.com to get the latest 13F filings and insider trades for Casey’s General Stores, Inc. (NASDAQ:CASY – Get Rating). 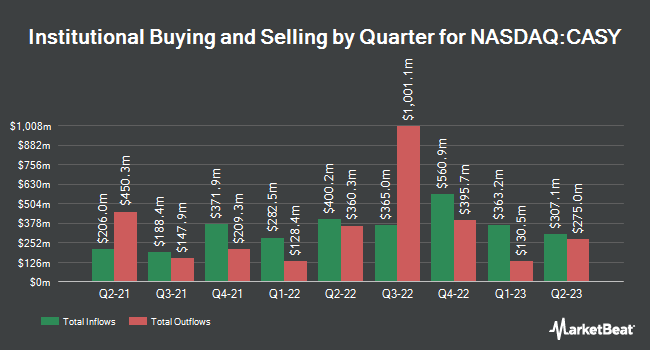