UniFirst (NYSE:UNF – Get Rating) last released its quarterly earnings data on Wednesday, October 19th. The textile maker reported $1.79 earnings per share (EPS) for the quarter, topping the consensus estimate of $1.73 by $0.06. UniFirst had a net margin of 5.17% and a return on equity of 6.77%. The company had revenue of $516.40 million during the quarter, compared to the consensus estimate of $511.58 million. During the same period in the previous year, the firm earned $1.82 earnings per share. UniFirst’s revenue for the quarter was up 11.0% on a year-over-year basis. On average, sell-side analysts predict that UniFirst Co. will post 7.24 earnings per share for the current year.

The business also recently disclosed a quarterly dividend, which will be paid on Wednesday, January 4th. Shareholders of record on Wednesday, December 7th will be given a $0.31 dividend. The ex-dividend date is Tuesday, December 6th. This is a positive change from UniFirst’s previous quarterly dividend of $0.30. This represents a $1.24 annualized dividend and a yield of 0.65%. UniFirst’s dividend payout ratio (DPR) is 21.98%.

A number of equities analysts have weighed in on the stock. StockNews.com began coverage on shares of UniFirst in a report on Wednesday, October 12th. They issued a “hold” rating on the stock. TheStreet cut UniFirst from a “b-” rating to a “c+” rating in a report on Thursday, September 15th.

Want to see what other hedge funds are holding UNF? Visit HoldingsChannel.com to get the latest 13F filings and insider trades for UniFirst Co. (NYSE:UNF – Get Rating). 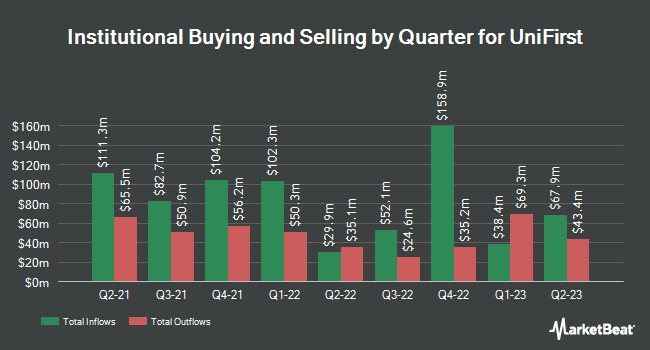 Receive News & Ratings for UniFirst Daily - Enter your email address below to receive a concise daily summary of the latest news and analysts' ratings for UniFirst and related companies with MarketBeat.com's FREE daily email newsletter.

The Goldman Sachs Group Analysts Give Kering a €690.00 Price Target

Complete the form below to receive the latest headlines and analysts' recommendations for UniFirst with our free daily email newsletter: