Agios Pharmaceuticals, Inc. (NASDAQ:AGIO – Get Rating) has earned an average recommendation of “Moderate Buy” from the eight analysts that are currently covering the stock, Marketbeat.com reports. One research analyst has rated the stock with a sell recommendation, one has issued a hold recommendation and six have issued a buy recommendation on the company. The average twelve-month price objective among brokers that have issued a report on the stock in the last year is $53.43.

Agios Pharmaceuticals (NASDAQ:AGIO – Get Rating) last issued its quarterly earnings results on Thursday, November 3rd. The biopharmaceutical company reported ($1.49) EPS for the quarter, beating analysts’ consensus estimates of ($1.71) by $0.22. The firm had revenue of $3.52 million during the quarter, compared to the consensus estimate of $5.24 million. During the same quarter last year, the firm earned ($1.48) earnings per share. On average, equities analysts expect that Agios Pharmaceuticals will post -6.34 EPS for the current year.

Agios Pharmaceuticals, Inc, a biopharmaceutical company, engages in the discovery and development of medicines in the field of cellular metabolism and adjacent areas of biology. The company offers PYRUKYND (mitapivat) an activator of both wild-type and a variety of mutant pyruvate kinase, PK, enzymes for the treatment of hemolytic anemias; and AG-946 that is in Phase I clinical study for treating hemolytic anemias and other indications. 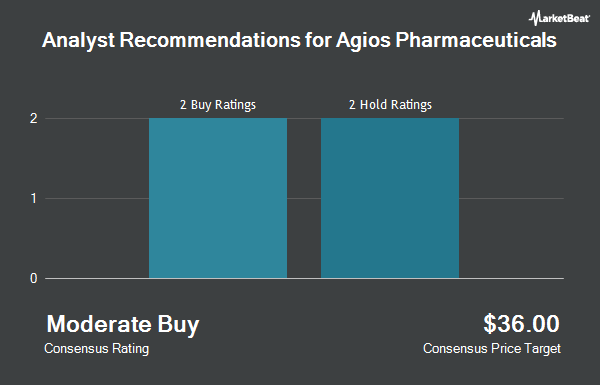 Complete the form below to receive the latest headlines and analysts' recommendations for Agios Pharmaceuticals with our free daily email newsletter: