Shares of Analog Devices, Inc. (NASDAQ:ADI – Get Rating) have been assigned a consensus recommendation of “Moderate Buy” from the twenty-one brokerages that are currently covering the company, MarketBeat reports. Five research analysts have rated the stock with a hold rating and ten have issued a buy rating on the company. The average twelve-month target price among analysts that have issued a report on the stock in the last year is $190.95.

Want More Great Investing Ideas?
Analog Devices (NASDAQ:ADI – Get Rating) last released its quarterly earnings data on Tuesday, November 22nd. The semiconductor company reported $2.73 earnings per share (EPS) for the quarter, topping the consensus estimate of $2.58 by $0.15. Analog Devices had a net margin of 22.88% and a return on equity of 13.58%. The company had revenue of $3.25 billion during the quarter, compared to analyst estimates of $3.16 billion. During the same quarter in the prior year, the business earned $1.73 earnings per share. The business’s quarterly revenue was up 38.8% compared to the same quarter last year. As a group, analysts predict that Analog Devices will post 9.41 EPS for the current year.

The company also recently disclosed a quarterly dividend, which will be paid on Thursday, December 15th. Investors of record on Monday, December 5th will be issued a $0.76 dividend. The ex-dividend date is Friday, December 2nd. This represents a $3.04 dividend on an annualized basis and a dividend yield of 1.80%. Analog Devices’s dividend payout ratio (DPR) is presently 57.58%.

In related news, Director Tunc Doluca sold 2,400 shares of the stock in a transaction dated Tuesday, October 4th. The shares were sold at an average price of $150.00, for a total value of $360,000.00. Following the sale, the director now owns 69,157 shares of the company’s stock, valued at approximately $10,373,550. The transaction was disclosed in a filing with the SEC, which can be accessed through this hyperlink. Corporate insiders own 0.91% of the company’s stock. 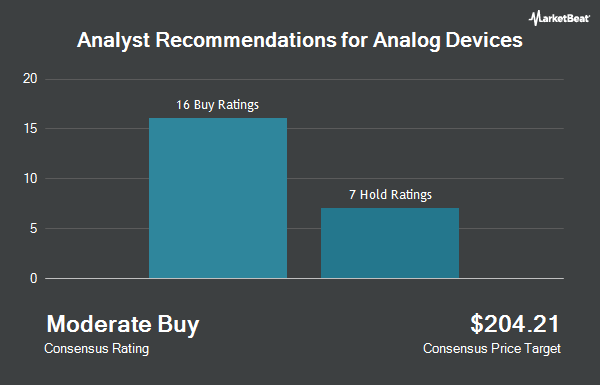