Cibc World Market Inc. reduced its holdings in shares of Snap Inc. (NYSE:SNAP – Get Rating) by 30.8% during the second quarter, HoldingsChannel.com reports. The fund owned 16,602 shares of the company’s stock after selling 7,375 shares during the quarter. Cibc World Market Inc.’s holdings in Snap were worth $218,000 as of its most recent filing with the Securities and Exchange Commission.

Snap (NYSE:SNAP – Get Rating) last announced its quarterly earnings data on Thursday, October 20th. The company reported ($0.11) earnings per share (EPS) for the quarter, beating analysts’ consensus estimates of ($0.17) by $0.06. Snap had a negative net margin of 24.32% and a negative return on equity of 25.57%. The company had revenue of $1.13 billion during the quarter, compared to analysts’ expectations of $1.15 billion. As a group, analysts expect that Snap Inc. will post -0.63 EPS for the current fiscal year.

Insider Buying and Selling at Snap

Snap Inc operates as a camera company in North America, Europe, and internationally. The company offers Snapchat, a camera application with various functionalities, such as Camera, Communication, Snap Map, Stories, and Spotlight that enable people to communicate visually through short videos and images.

Want to see what other hedge funds are holding SNAP? Visit HoldingsChannel.com to get the latest 13F filings and insider trades for Snap Inc. (NYSE:SNAP – Get Rating). 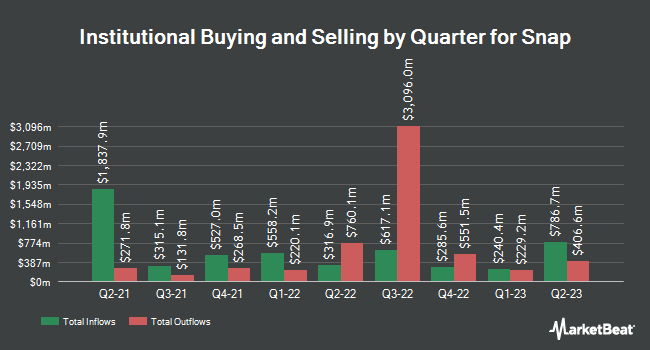 Receive News & Ratings for Snap Daily - Enter your email address below to receive a concise daily summary of the latest news and analysts' ratings for Snap and related companies with MarketBeat.com's FREE daily email newsletter.

Complete the form below to receive the latest headlines and analysts' recommendations for Snap with our free daily email newsletter: