Healthcare of Ontario Pension Plan Trust Fund boosted its position in shares of Encore Capital Group, Inc. (NASDAQ:ECPG – Get Rating) by 22.9% during the 2nd quarter, according to the company in its most recent disclosure with the Securities & Exchange Commission. The firm owned 25,800 shares of the asset manager’s stock after buying an additional 4,800 shares during the period. Healthcare of Ontario Pension Plan Trust Fund’s holdings in Encore Capital Group were worth $1,490,000 as of its most recent SEC filing.

Want More Great Investing Ideas?
Several brokerages have weighed in on ECPG. JMP Securities lowered their target price on Encore Capital Group from $74.00 to $68.00 in a research note on Thursday, November 3rd. StockNews.com began coverage on Encore Capital Group in a research note on Wednesday, October 12th. They issued a “hold” rating on the stock.

Encore Capital Group, Inc, a specialty finance company, provides debt recovery solutions and other related services for consumers across financial assets worldwide. The company purchases portfolios of defaulted consumer receivables at deep discounts to face value, as well as manages them by working with individuals as they repay their obligations and works toward financial recovery.

Want to see what other hedge funds are holding ECPG? Visit HoldingsChannel.com to get the latest 13F filings and insider trades for Encore Capital Group, Inc. (NASDAQ:ECPG – Get Rating). 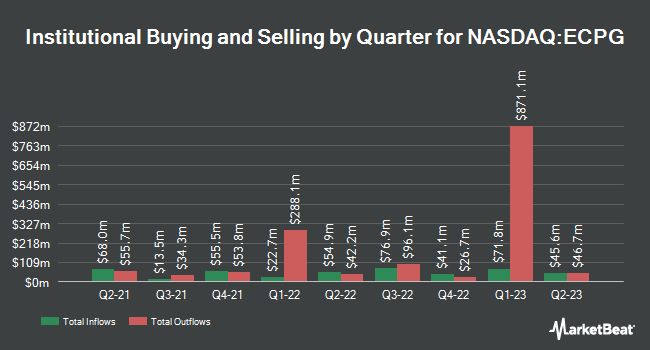 Complete the form below to receive the latest headlines and analysts' recommendations for Encore Capital Group with our free daily email newsletter: