Mackenzie Financial Corp grew its holdings in Robert Half International Inc. (NYSE:RHI – Get Rating) by 28.0% in the second quarter, according to the company in its most recent Form 13F filing with the SEC. The firm owned 8,418 shares of the business services provider’s stock after acquiring an additional 1,840 shares during the quarter. Mackenzie Financial Corp’s holdings in Robert Half International were worth $630,000 as of its most recent SEC filing.

Robert Half International Trading Up 0.6 %

Robert Half International (NYSE:RHI – Get Rating) last released its quarterly earnings data on Thursday, October 20th. The business services provider reported $1.53 earnings per share (EPS) for the quarter, missing the consensus estimate of $1.65 by ($0.12). Robert Half International had a net margin of 9.31% and a return on equity of 46.83%. The firm had revenue of $1.83 billion during the quarter, compared to analyst estimates of $1.91 billion. During the same period in the prior year, the company earned $1.53 EPS. The business’s quarterly revenue was up 7.0% compared to the same quarter last year. As a group, equities analysts predict that Robert Half International Inc. will post 6.01 EPS for the current fiscal year.

The company also recently disclosed a quarterly dividend, which will be paid on Thursday, December 15th. Stockholders of record on Friday, November 25th will be paid a $0.43 dividend. This represents a $1.72 annualized dividend and a dividend yield of 2.23%. The ex-dividend date of this dividend is Wednesday, November 23rd. Robert Half International’s dividend payout ratio is currently 27.92%.

In other news, EVP Robert W. Glass sold 15,000 shares of the company’s stock in a transaction that occurred on Friday, November 11th. The stock was sold at an average price of $80.84, for a total value of $1,212,600.00. Following the completion of the transaction, the executive vice president now owns 232,349 shares of the company’s stock, valued at $18,783,093.16. The transaction was disclosed in a legal filing with the Securities & Exchange Commission, which is accessible through this link. 2.80% of the stock is currently owned by insiders.

Want to see what other hedge funds are holding RHI? Visit HoldingsChannel.com to get the latest 13F filings and insider trades for Robert Half International Inc. (NYSE:RHI – Get Rating). 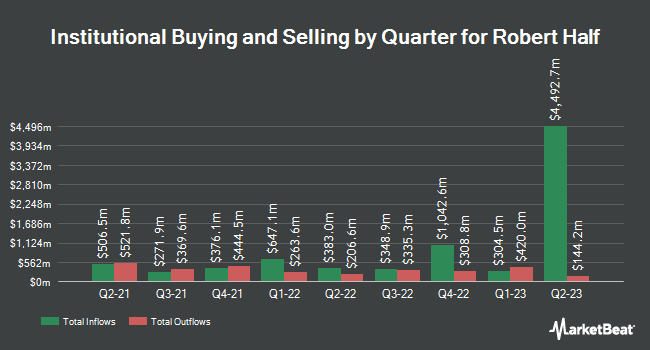 Complete the form below to receive the latest headlines and analysts' recommendations for Robert Half International with our free daily email newsletter: