Mitsubishi UFJ Trust & Banking Corp acquired a new stake in shares of iHeartMedia, Inc. (NASDAQ:IHRT – Get Rating) in the second quarter, according to the company in its most recent disclosure with the Securities & Exchange Commission. The institutional investor acquired 10,238 shares of the company’s stock, valued at approximately $81,000.

iHeartMedia (NASDAQ:IHRT – Get Rating) last announced its quarterly earnings data on Thursday, November 3rd. The company reported $0.21 EPS for the quarter, meeting analysts’ consensus estimates of $0.21. iHeartMedia had a negative net margin of 6.05% and a positive return on equity of 13.23%. The company had revenue of $988.93 million during the quarter, compared to the consensus estimate of $982.71 million. On average, equities analysts predict that iHeartMedia, Inc. will post -1.85 EPS for the current fiscal year.

In other news, CEO Robert W. Pittman acquired 14,144 shares of the firm’s stock in a transaction dated Thursday, November 10th. The stock was bought at an average price of $7.22 per share, with a total value of $102,119.68. Following the transaction, the chief executive officer now directly owns 1,788,777 shares in the company, valued at approximately $12,914,969.94. The purchase was disclosed in a filing with the SEC, which is accessible through this hyperlink. Insiders own 2.90% of the company’s stock.

Want to see what other hedge funds are holding IHRT? Visit HoldingsChannel.com to get the latest 13F filings and insider trades for iHeartMedia, Inc. (NASDAQ:IHRT – Get Rating). 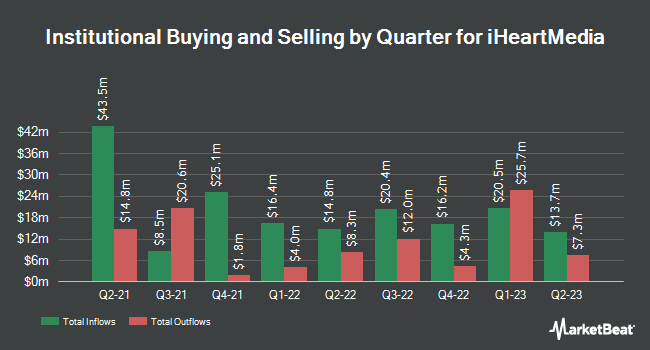 Complete the form below to receive the latest headlines and analysts' recommendations for iHeartMedia with our free daily email newsletter: