Symbotic (NASDAQ:SYM – Get Rating) had its price target cut by stock analysts at The Goldman Sachs Group from $13.00 to $10.00 in a research note issued to investors on Wednesday, MarketBeat reports. The firm currently has a “neutral” rating on the stock. The Goldman Sachs Group’s target price would indicate a potential downside of 18.17% from the stock’s previous close.

Want More Great Investing Ideas?
Symbotic (NASDAQ:SYM – Get Rating) last announced its quarterly earnings data on Monday, November 21st. The company reported ($0.04) earnings per share for the quarter, beating the consensus estimate of ($0.05) by $0.01. Symbotic had a negative return on equity of 558.47% and a negative net margin of 10.08%. As a group, equities research analysts expect that Symbotic will post -0.01 earnings per share for the current fiscal year.

Institutional Investors Weigh In On Symbotic 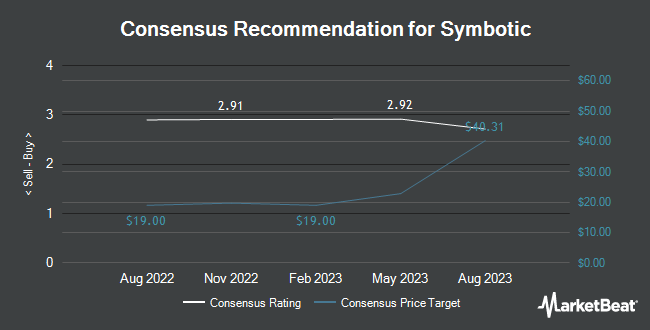 Demant A/S Given Average Rating of “Hold” by Brokerages

Extreme Networks, Inc. Given Consensus Rating of “Buy” by Analysts

TrueCar, Inc. Given Consensus Rating of “Hold” by Analysts

Denali Therapeutics Inc. Given Consensus Recommendation of “Buy” by Brokerages