Teradyne (NASDAQ:TER) Given a $110.00 Price Target by Evercore ISI Analysts

Teradyne (NASDAQ:TER – Get Rating) has been given a $110.00 price target by stock analysts at Evercore ISI in a research note issued to investors on Wednesday, Stock Target Advisor reports. Evercore ISI’s price objective points to a potential upside of 16.98% from the company’s current price.

Want More Great Investing Ideas?
Teradyne (NASDAQ:TER – Get Rating) last announced its quarterly earnings data on Tuesday, October 25th. The company reported $1.15 earnings per share for the quarter, beating the consensus estimate of $1.04 by $0.11. The business had revenue of $827.07 million during the quarter, compared to analyst estimates of $800.20 million. Teradyne had a return on equity of 33.39% and a net margin of 23.38%. Teradyne’s revenue was down 13.0% compared to the same quarter last year. During the same period in the prior year, the company earned $1.59 earnings per share. Analysts anticipate that Teradyne will post 4.07 earnings per share for the current year.

In related news, insider Brad Robbins sold 3,144 shares of the firm’s stock in a transaction dated Friday, September 30th. The stock was sold at an average price of $75.84, for a total value of $238,440.96. Following the sale, the insider now directly owns 44,755 shares of the company’s stock, valued at $3,394,219.20. The transaction was disclosed in a legal filing with the Securities & Exchange Commission, which can be accessed through the SEC website. Insiders own 0.36% of the company’s stock. 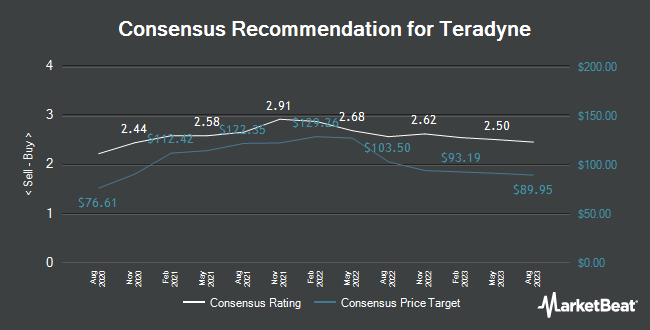 Receive News & Ratings for Teradyne Daily - Enter your email address below to receive a concise daily summary of the latest news and analysts' ratings for Teradyne and related companies with MarketBeat.com's FREE daily email newsletter.

Complete the form below to receive the latest headlines and analysts' recommendations for Teradyne with our free daily email newsletter: