VMware, Inc. (NYSE:VMW – Get Rating) has been given a consensus recommendation of “Moderate Buy” by the twenty-two ratings firms that are currently covering the company, MarketBeat.com reports. Nine analysts have rated the stock with a hold rating and nine have given a buy rating to the company. The average twelve-month target price among analysts that have updated their coverage on the stock in the last year is $138.42.

Want More Great Investing Ideas?
VMware (NYSE:VMW – Get Rating) last announced its quarterly earnings data on Thursday, August 25th. The virtualization software provider reported $0.99 earnings per share for the quarter, missing the consensus estimate of $1.06 by ($0.07). The firm had revenue of $3.34 billion during the quarter, compared to analyst estimates of $3.30 billion. VMware had a net margin of 10.68% and a negative return on equity of 430.43%. The company’s quarterly revenue was up 6.3% compared to the same quarter last year. During the same quarter last year, the company earned $1.18 EPS. As a group, research analysts expect that VMware will post 4.34 EPS for the current year.

In related news, EVP Jean Pierre Brulard sold 359 shares of the company’s stock in a transaction on Thursday, September 22nd. The stock was sold at an average price of $111.05, for a total transaction of $39,866.95. Following the transaction, the executive vice president now directly owns 82,777 shares of the company’s stock, valued at $9,192,385.85. The transaction was disclosed in a legal filing with the Securities & Exchange Commission, which can be accessed through this link. 40.30% of the stock is owned by insiders.

VMware, Inc provides software solutions in the areas of modern applications, cloud management and infrastructure, networking, security, and digital workspaces in the United States and internationally. It offers VMware multi-cloud solutions, including VMware vSphere, a data center infrastructure that provides the fundamental compute layer; vSAN and VxRail, which offers holistic data storage and protection options to applications running on vSphere; and vRealize Cloud Management solutions that manages hybrid and multi-cloud environments running in virtual machines and containers, as well as VMware Cloud Foundation, a cloud platform that combines its vSphere, vSAN, and NSX with vRealize Cloud Management into an integrated stack and delivers enterprise-ready cloud infrastructure for private and public clouds. 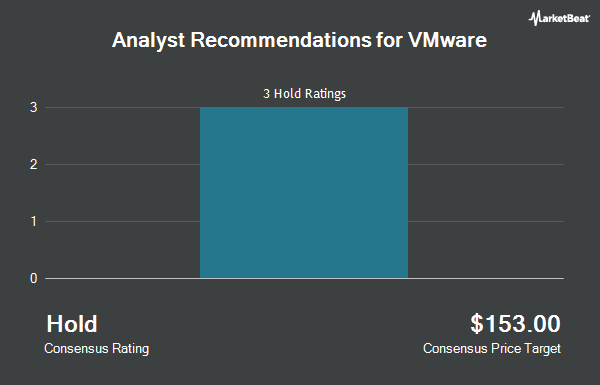 Receive News & Ratings for VMware Daily - Enter your email address below to receive a concise daily summary of the latest news and analysts' ratings for VMware and related companies with MarketBeat.com's FREE daily email newsletter.

Complete the form below to receive the latest headlines and analysts' recommendations for VMware with our free daily email newsletter: