Raymond James & Associates increased its holdings in MercadoLibre, Inc. (NASDAQ:MELI – Get Rating) by 5.1% in the 3rd quarter, according to its most recent disclosure with the SEC. The firm owned 21,084 shares of the company’s stock after acquiring an additional 1,017 shares during the period. Raymond James & Associates’ holdings in MercadoLibre were worth $17,453,000 at the end of the most recent quarter.

Want More Great Investing Ideas?
MercadoLibre (NASDAQ:MELI – Get Rating) last announced its quarterly earnings data on Thursday, November 3rd. The company reported $2.56 earnings per share (EPS) for the quarter, beating the consensus estimate of $2.31 by $0.25. MercadoLibre had a return on equity of 17.11% and a net margin of 2.80%. The business had revenue of $2.63 billion for the quarter, compared to analysts’ expectations of $2.69 billion. During the same period last year, the firm earned $1.92 earnings per share. The company’s revenue for the quarter was up 41.6% compared to the same quarter last year. As a group, equities analysts predict that MercadoLibre, Inc. will post 8.2 EPS for the current fiscal year.

MercadoLibre, Inc operates online commerce platforms in Latin America. It operates Mercado Libre Marketplace, an automated online commerce platform that enables businesses, merchants, and individuals to list merchandise and conduct sales and purchases online; and Mercado Pago FinTech platform, a financial technology solution platform, which facilitates transactions on and off its marketplaces by providing a mechanism that allows its users to send and receive payments online, as well as allows users to transfer money through their websites or on the apps. 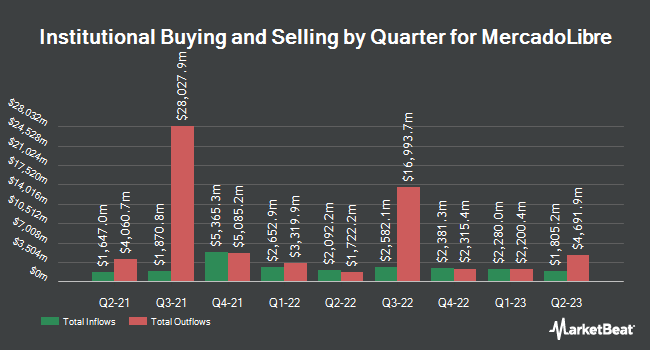 Complete the form below to receive the latest headlines and analysts' recommendations for MercadoLibre with our free daily email newsletter: