State of Alaska Department of Revenue lessened its stake in shares of Cinemark Holdings, Inc. (NYSE:CNK – Get Rating) by 8.4% in the third quarter, according to its most recent filing with the Securities & Exchange Commission. The institutional investor owned 74,285 shares of the company’s stock after selling 6,809 shares during the quarter. State of Alaska Department of Revenue owned about 0.06% of Cinemark worth $899,000 at the end of the most recent reporting period.

Want More Great Investing Ideas?
Cinemark (NYSE:CNK – Get Rating) last announced its quarterly earnings data on Friday, November 4th. The company reported ($0.20) earnings per share for the quarter, beating the consensus estimate of ($0.21) by $0.01. Cinemark had a negative return on equity of 27.93% and a negative net margin of 6.59%. The firm had revenue of $650.40 million during the quarter, compared to the consensus estimate of $616.20 million. Analysts expect that Cinemark Holdings, Inc. will post -1.56 earnings per share for the current year.

Insider Buying and Selling at Cinemark

In other Cinemark news, Director Enrique Senior sold 35,054 shares of the business’s stock in a transaction that occurred on Friday, December 9th. The stock was sold at an average price of $12.47, for a total value of $437,123.38. Following the completion of the sale, the director now owns 46,609 shares in the company, valued at $581,214.23. The sale was disclosed in a filing with the Securities & Exchange Commission, which is accessible through the SEC website. Corporate insiders own 10.00% of the company’s stock.

Cinemark Holdings, Inc, together with its subsidiaries, engages in the motion picture exhibition business. As of June 30, 2022, it operated 522 theatres with 5,868 screens in the United States, and South and Central America. The company was founded in 1984 and is headquartered in Plano, Texas. 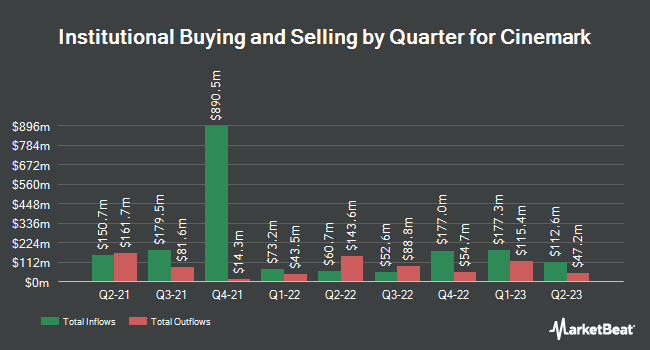 Receive News & Ratings for Cinemark Daily - Enter your email address below to receive a concise daily summary of the latest news and analysts' ratings for Cinemark and related companies with MarketBeat.com's FREE daily email newsletter.

Complete the form below to receive the latest headlines and analysts' recommendations for Cinemark with our free daily email newsletter: