Cullen/Frost Bankers (NYSE:CFR – Get Rating) last posted its earnings results on Thursday, October 27th. The bank reported $2.59 earnings per share for the quarter, topping the consensus estimate of $2.19 by $0.40. Cullen/Frost Bankers had a net margin of 30.07% and a return on equity of 14.18%. The business had revenue of $479.34 million for the quarter, compared to analyst estimates of $445.68 million.

The company also recently declared a quarterly dividend, which was paid on Thursday, December 15th. Investors of record on Wednesday, November 30th were given a $0.87 dividend. The ex-dividend date was Tuesday, November 29th. This represents a $3.48 dividend on an annualized basis and a dividend yield of 2.63%. Cullen/Frost Bankers’s dividend payout ratio is 46.71%.

In related news, EVP Bobby Berman sold 1,941 shares of the stock in a transaction that occurred on Friday, October 28th. The shares were sold at an average price of $151.62, for a total value of $294,294.42. Following the sale, the executive vice president now directly owns 24,589 shares in the company, valued at approximately $3,728,184.18. The sale was disclosed in a filing with the Securities & Exchange Commission, which is accessible through this hyperlink. 3.76% of the stock is currently owned by corporate insiders. 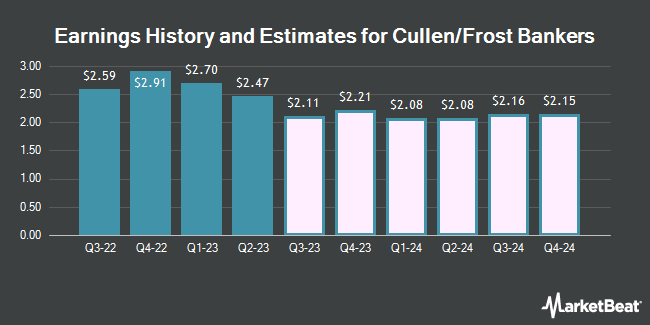