State of Alaska Department of Revenue cut its position in shares of Encompass Health Co. (NYSE:EHC – Get Rating) by 2.4% during the third quarter, HoldingsChannel.com reports. The institutional investor owned 13,851 shares of the company’s stock after selling 340 shares during the quarter. State of Alaska Department of Revenue’s holdings in Encompass Health were worth $626,000 as of its most recent filing with the SEC.

Want More Great Investing Ideas?
Encompass Health (NYSE:EHC – Get Rating) last released its quarterly earnings data on Wednesday, October 26th. The company reported $0.67 earnings per share (EPS) for the quarter, missing the consensus estimate of $0.68 by ($0.01). Encompass Health had a return on equity of 15.59% and a net margin of 5.39%. The firm had revenue of $1.09 billion for the quarter, compared to analyst estimates of $1.06 billion. Sell-side analysts anticipate that Encompass Health Co. will post 2.79 earnings per share for the current year.

The company also recently disclosed a quarterly dividend, which will be paid on Tuesday, January 17th. Investors of record on Tuesday, January 3rd will be given a dividend of $0.15 per share. This represents a $0.60 annualized dividend and a yield of 1.00%. The ex-dividend date is Friday, December 30th. Encompass Health’s payout ratio is currently 22.06%.

In related news, Director Greg D. Carmichael bought 1,830 shares of the stock in a transaction on Monday, October 31st. The stock was bought at an average price of $54.67 per share, with a total value of $100,046.10. Following the completion of the purchase, the director now directly owns 10,546 shares in the company, valued at approximately $576,549.82. The acquisition was disclosed in a legal filing with the Securities & Exchange Commission, which can be accessed through this hyperlink. 2.70% of the stock is currently owned by insiders.

Encompass Health Corporation provides facility-based and home-based post-acute healthcare services in the United States. The company operates in two segments, Inpatient Rehabilitation, and Home Health and Hospice. The Inpatient Rehabilitation segment provides specialized rehabilitative treatment on an inpatient and outpatient basis to patients who are recovering from conditions, such as stroke and other neurological disorders, cardiac and pulmonary conditions, brain and spinal cord injuries, complex orthopedic conditions, and amputations.

Want to see what other hedge funds are holding EHC? Visit HoldingsChannel.com to get the latest 13F filings and insider trades for Encompass Health Co. (NYSE:EHC – Get Rating). 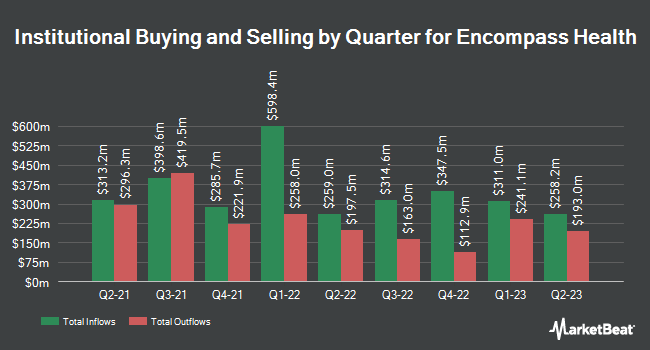 Complete the form below to receive the latest headlines and analysts' recommendations for Encompass Health with our free daily email newsletter: