argenx SE (NASDAQ:ARGX – Get Rating) – Investment analysts at HC Wainwright lifted their FY2026 earnings estimates for shares of argenx in a research note issued on Tuesday, January 10th. HC Wainwright analyst D. Tsao now forecasts that the company will earn $62.29 per share for the year, up from their previous estimate of $60.34. HC Wainwright currently has a “Buy” rating and a $480.00 target price on the stock. The consensus estimate for argenx’s current full-year earnings is ($15.54) per share.

argenx (NASDAQ:ARGX – Get Rating) last announced its quarterly earnings results on Thursday, October 27th. The company reported ($4.26) earnings per share for the quarter, missing the consensus estimate of ($3.50) by ($0.76). argenx had a negative return on equity of 49.53% and a negative net margin of 295.08%. The business had revenue of $146.49 million during the quarter, compared to analysts’ expectations of $115.49 million. 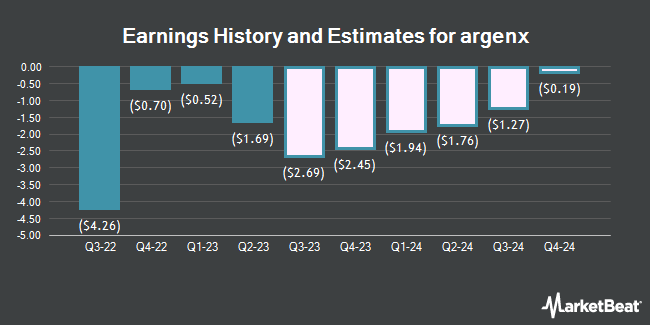