Shares of Horizon Technology Finance Co. (NASDAQ:HRZN – Get Rating) have been given an average rating of “Hold” by the six analysts that are covering the stock, Marketbeat Ratings reports. Two research analysts have rated the stock with a sell rating and four have given a hold rating to the company. The average 12 month price objective among analysts that have issued a report on the stock in the last year is $10.88.

The business also recently announced a monthly dividend, which will be paid on Wednesday, March 15th. Stockholders of record on Friday, February 17th will be paid a dividend of $0.11 per share. This represents a $1.32 dividend on an annualized basis and a dividend yield of 10.65%. The ex-dividend date is Thursday, February 16th. Horizon Technology Finance’s dividend payout ratio is presently 162.96%.

Horizon Technology Finance Corp. operates as a specialty finance company, which engages in the provision of capital in the form of secured loans to venture capital backed companies. It is also involved in lending and investing in portfolio companies in technology, life science, healthcare information and services and cleantech industries. 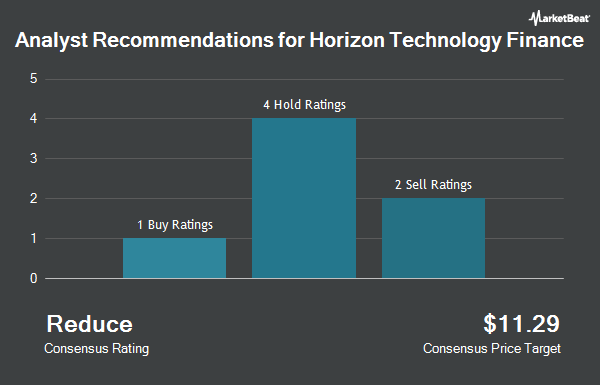 Complete the form below to receive the latest headlines and analysts' recommendations for Horizon Technology Finance with our free daily email newsletter: