Imperial Oil Limited (NYSEAMERICAN:IMO – Get Rating) (TSE:IMO) has been given an average rating of “Hold” by the eleven analysts that are covering the company, Marketbeat reports. One analyst has rated the stock with a sell recommendation, one has given a hold recommendation and two have issued a buy recommendation on the company. The average 1-year target price among brokerages that have issued a report on the stock in the last year is $77.38.

Want More Great Investing Ideas?
Imperial Oil (NYSEAMERICAN:IMO – Get Rating) (TSE:IMO) last released its earnings results on Wednesday, November 2nd. The energy company reported $2.22 earnings per share (EPS) for the quarter, beating analysts’ consensus estimates of $2.09 by $0.13. The company had revenue of $11.67 billion for the quarter, compared to analyst estimates of $14.33 billion. Imperial Oil had a net margin of 11.14% and a return on equity of 28.06%. Analysts forecast that Imperial Oil will post 7.57 earnings per share for the current fiscal year.

The firm also recently announced a quarterly dividend, which was paid on Sunday, January 1st. Investors of record on Friday, December 2nd were given a dividend of $0.3226 per share. This represents a $1.29 dividend on an annualized basis and a yield of 2.62%. The ex-dividend date of this dividend was Thursday, December 1st. This is an increase from Imperial Oil’s previous quarterly dividend of $0.26. Imperial Oil’s dividend payout ratio is 17.15%.

Imperial Oil Limited engages in exploration, production, and sale of crude oil and natural gas in Canada. The company operates through three segments: Upstream, Downstream and Chemical segments. The Upstream segment explores for, and produces crude oil, natural gas, synthetic oil, and bitumen. As of December 31, 2021, this segment had 386 million oil-equivalent barrels of proved undeveloped reserves. 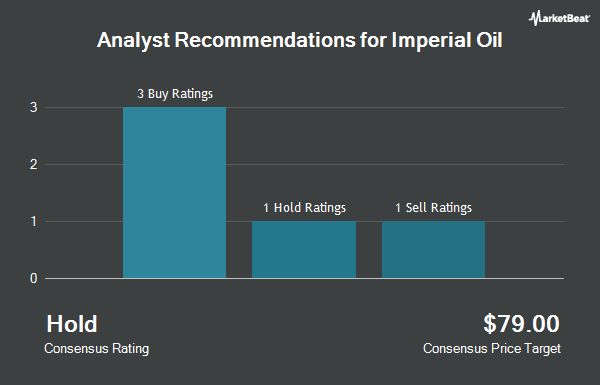 Complete the form below to receive the latest headlines and analysts' recommendations for Imperial Oil with our free daily email newsletter: