State of Alaska Department of Revenue lowered its position in Mercury Systems, Inc. (NASDAQ:MRCY – Get Rating) by 3.4% during the third quarter, according to its most recent Form 13F filing with the Securities and Exchange Commission (SEC). The institutional investor owned 8,003 shares of the technology company’s stock after selling 280 shares during the quarter. State of Alaska Department of Revenue’s holdings in Mercury Systems were worth $324,000 at the end of the most recent quarter.

Want More Great Investing Ideas?
Mercury Systems (NASDAQ:MRCY – Get Rating) last posted its quarterly earnings results on Tuesday, November 1st. The technology company reported $0.11 EPS for the quarter, beating the consensus estimate of ($0.01) by $0.12. The firm had revenue of $227.58 million during the quarter, compared to analysts’ expectations of $218.40 million. Mercury Systems had a return on equity of 5.51% and a net margin of 0.41%. Research analysts anticipate that Mercury Systems, Inc. will post 1.28 EPS for the current year.

Mercury Systems, Inc, a technology company, manufactures and sells components, products, modules, and subsystems for aerospace and defense industries in the United States, Europe, and the Asia Pacific. Its products and solutions are deployed in approximately 300 programs with 25 defense contractors and commercial aviation customers.

Want to see what other hedge funds are holding MRCY? Visit HoldingsChannel.com to get the latest 13F filings and insider trades for Mercury Systems, Inc. (NASDAQ:MRCY – Get Rating). 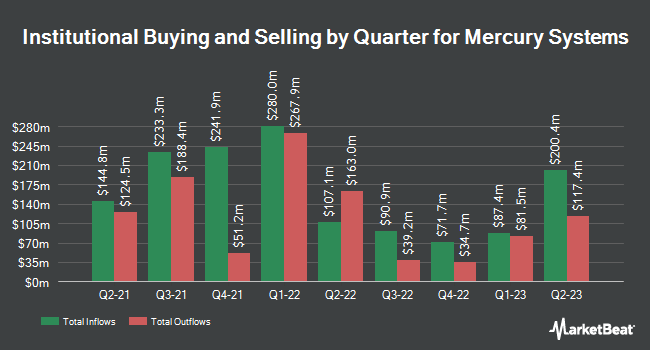 Complete the form below to receive the latest headlines and analysts' recommendations for Mercury Systems with our free daily email newsletter: