Assenagon Asset Management S.A. increased its holdings in shares of Fortinet, Inc. (NASDAQ:FTNT – Get Rating) by 179.5% in the 3rd quarter, according to its most recent disclosure with the Securities and Exchange Commission (SEC). The firm owned 14,436 shares of the software maker’s stock after purchasing an additional 9,271 shares during the period. Assenagon Asset Management S.A.’s holdings in Fortinet were worth $709,000 at the end of the most recent quarter.

In related news, VP John Whittle sold 3,125 shares of the business’s stock in a transaction dated Friday, November 11th. The stock was sold at an average price of $55.00, for a total transaction of $171,875.00. Following the completion of the transaction, the vice president now directly owns 12,876 shares in the company, valued at $708,180. The transaction was disclosed in a document filed with the SEC, which is available through this link. 18.60% of the stock is owned by company insiders.

Fortinet (NASDAQ:FTNT – Get Rating) last announced its quarterly earnings results on Wednesday, November 2nd. The software maker reported $0.28 earnings per share for the quarter, beating the consensus estimate of $0.20 by $0.08. The company had revenue of $1.15 billion during the quarter, compared to analysts’ expectations of $1.12 billion. Fortinet had a return on equity of 9,183.04% and a net margin of 18.12%. The firm’s quarterly revenue was up 32.6% compared to the same quarter last year. During the same period in the previous year, the business earned $0.15 earnings per share. On average, sell-side analysts predict that Fortinet, Inc. will post 0.9 EPS for the current year.

Fortinet, Inc provides cybersecurity solutions to a variety of businesses, such as enterprises, communication service providers and small businesses. It operates through the following segments: Network Security, Infrastructure Security, Cloud Security, and Endpoint Protection, Internet of Things and Operational Technology. 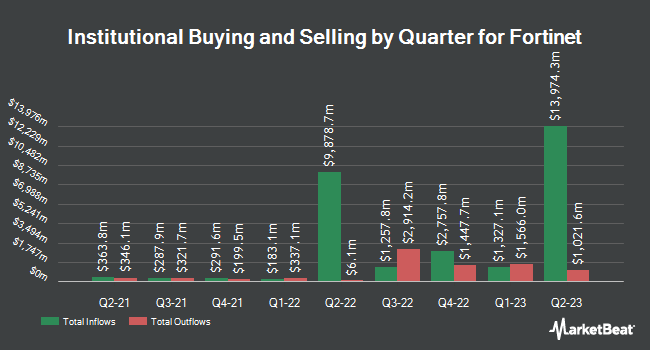 Receive News & Ratings for Fortinet Daily - Enter your email address below to receive a concise daily summary of the latest news and analysts' ratings for Fortinet and related companies with MarketBeat.com's FREE daily email newsletter.

Fortis to Release Earnings on Friday

Complete the form below to receive the latest headlines and analysts' recommendations for Fortinet with our free daily email newsletter: