Truist Financial Corp increased its position in shares of Schneider National, Inc. (NYSE:SNDR – Get Rating) by 1.5% during the third quarter, according to its most recent Form 13F filing with the SEC. The institutional investor owned 84,934 shares of the company’s stock after buying an additional 1,286 shares during the period. Truist Financial Corp’s holdings in Schneider National were worth $1,724,000 as of its most recent filing with the SEC.

In related news, insider Shaleen Devgun sold 10,000 shares of Schneider National stock in a transaction that occurred on Tuesday, November 15th. The shares were sold at an average price of $25.00, for a total value of $250,000.00. Following the completion of the transaction, the insider now owns 134,497 shares in the company, valued at $3,362,425. The sale was disclosed in a legal filing with the Securities & Exchange Commission, which can be accessed through this hyperlink. Company insiders own 32.97% of the company’s stock.

Schneider National (NYSE:SNDR – Get Rating) last announced its quarterly earnings data on Thursday, October 27th. The company reported $0.70 earnings per share for the quarter, beating analysts’ consensus estimates of $0.67 by $0.03. The firm had revenue of $1.68 billion during the quarter, compared to analysts’ expectations of $1.73 billion. Schneider National had a net margin of 7.28% and a return on equity of 19.14%. As a group, analysts forecast that Schneider National, Inc. will post 2.61 EPS for the current year.

The firm also recently disclosed a quarterly dividend, which was paid on Tuesday, January 10th. Investors of record on Friday, December 9th were issued a $0.08 dividend. This represents a $0.32 dividend on an annualized basis and a dividend yield of 1.29%. The ex-dividend date was Thursday, December 8th. Schneider National’s dividend payout ratio (DPR) is currently 11.85%.

Schneider National, Inc, together with its subsidiaries, provides surface transportation and logistics solutions in the United States, Canada, and Mexico. The company operates through three segments: Truckload, Intermodal, and Logistics. The Truckload segment offers standard long-haul and regional shipping services primarily through dry van, bulk, temperature-controlled, and flat-bed equipment, as well as cross dock and customized solutions for time-sensitive loads.

Want to see what other hedge funds are holding SNDR? Visit HoldingsChannel.com to get the latest 13F filings and insider trades for Schneider National, Inc. (NYSE:SNDR – Get Rating). 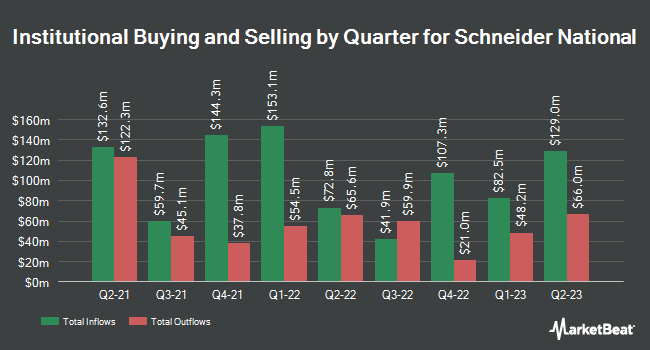 Pfizer Given a $45.00 Price Target by UBS Group Analysts

Complete the form below to receive the latest headlines and analysts' recommendations for Schneider National with our free daily email newsletter: