Comerica Bank cut its holdings in shares of Valvoline Inc. (NYSE:VVV – Get Rating) by 2.5% in the third quarter, Holdings Channel reports. The institutional investor owned 88,866 shares of the basic materials company’s stock after selling 2,264 shares during the quarter. Comerica Bank’s holdings in Valvoline were worth $2,510,000 as of its most recent filing with the Securities & Exchange Commission.

Want More Great Investing Ideas?
Valvoline (NYSE:VVV – Get Rating) last released its quarterly earnings results on Tuesday, November 15th. The basic materials company reported $0.59 EPS for the quarter, beating analysts’ consensus estimates of $0.56 by $0.03. Valvoline had a return on equity of 170.52% and a net margin of 13.99%. The firm had revenue of $335.40 million for the quarter, compared to analyst estimates of $794.02 million. Equities analysts anticipate that Valvoline Inc. will post 1.13 EPS for the current fiscal year.

The company also recently declared a quarterly dividend, which was paid on Thursday, December 15th. Investors of record on Friday, December 2nd were paid a dividend of $0.125 per share. This represents a $0.50 dividend on an annualized basis and a yield of 1.44%. The ex-dividend date of this dividend was Thursday, December 1st. Valvoline’s dividend payout ratio (DPR) is currently 21.19%.

Several equities research analysts have issued reports on the company. Citigroup increased their price target on Valvoline from $35.00 to $39.00 in a report on Wednesday, November 16th. StockNews.com upgraded Valvoline from a “sell” rating to a “hold” rating in a research note on Friday, January 6th. Finally, Royal Bank of Canada started coverage on Valvoline in a research note on Tuesday, December 6th. They issued an “outperform” rating and a $39.00 price target for the company.

Valvoline Inc provides automotive services through retail stores in the United States and Canada. It offers cabin air filter, battery replacement, and tire rotation services for various vehicles. As of September 30, 2022, it operated 1,700 system-wide service center stores. The company was founded in 1866 and is headquartered in Lexington, Kentucky.

Want to see what other hedge funds are holding VVV? Visit HoldingsChannel.com to get the latest 13F filings and insider trades for Valvoline Inc. (NYSE:VVV – Get Rating). 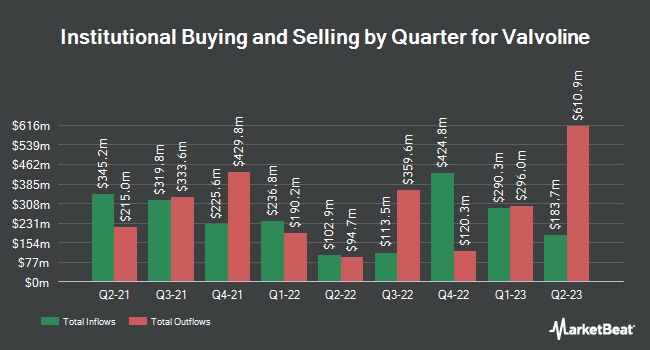 Complete the form below to receive the latest headlines and analysts' recommendations for Valvoline with our free daily email newsletter: