Target Co. (NYSE:TGT – Get Rating) has received an average rating of “Moderate Buy” from the thirty analysts that are currently covering the stock, MarketBeat reports. Twelve analysts have rated the stock with a hold rating, thirteen have assigned a buy rating and one has assigned a strong buy rating to the company. The average 12 month price target among brokers that have covered the stock in the last year is $180.75.

Want More Great Investing Ideas?
Target (NYSE:TGT – Get Rating) last released its earnings results on Wednesday, November 16th. The retailer reported $1.54 EPS for the quarter, missing the consensus estimate of $2.15 by ($0.61). The firm had revenue of $26.12 billion during the quarter, compared to the consensus estimate of $26.40 billion. Target had a net margin of 3.17% and a return on equity of 30.51%. Target’s quarterly revenue was up 3.3% compared to the same quarter last year. During the same period in the prior year, the business earned $3.03 earnings per share. On average, analysts forecast that Target will post 5.54 earnings per share for the current year.

The company also recently declared a quarterly dividend, which will be paid on Friday, March 10th. Investors of record on Wednesday, February 15th will be issued a dividend of $1.08 per share. The ex-dividend date is Tuesday, February 14th. This represents a $4.32 dividend on an annualized basis and a yield of 2.69%. Target’s dividend payout ratio is currently 59.18%.

Institutional Investors Weigh In On Target

Target Corp. engages in the operation and ownership of general merchandise stores. It offers food assortments including perishables, dry grocery, dairy, and frozen items. The company was founded by George Draper Dayton in 1902 and is headquartered in Minneapolis, MN. 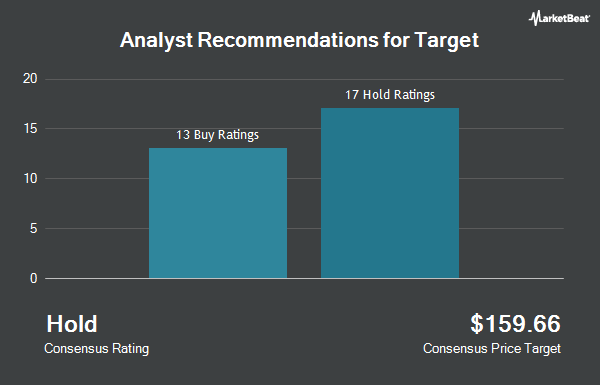 Receive News & Ratings for Target Daily - Enter your email address below to receive a concise daily summary of the latest news and analysts' ratings for Target and related companies with MarketBeat.com's FREE daily email newsletter.

Complete the form below to receive the latest headlines and analysts' recommendations for Target with our free daily email newsletter: